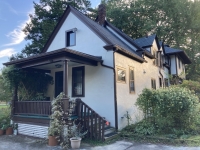 The city of Cleveland Heights gained two new landmarks in 2021: the Neff-Henderson House, and the Bradford Cinder Path.

Mathias Neff built his farmhouse, at what is now 2181 North Taylor Road, in 1885, on what was then a five-acre property. Ten years later, John Henderson purchased the property, living there for more than 20 years. A prominent attorney, Henderson opened the Henderson and Quail law firm, helped found the Cleveland Bar Association, and served as a counselor to John D. Rockefeller.

In 1915, the house transferred to Henderson’s daughter Janet and Carl Adams, her husband. Adams served as president of the Robeson Preservo Company, which produced waterproof canvas for the maritime industry. The couple engaged noted local architect John William Cresswell Corbusier to design a large, Tudor Revival-style addition to the front of the home, as well as a new garage. Corbusier is well known for designing significant houses of worship, including Church of the Covenant in University Circle, and Church of the Savior in Cleveland Heights.

The history of 2181 North Taylor Road helps tell the story of Cleveland Heights as it changed from rural farmland to a growing city.

At the other end of Taylor Road, near what is now Fairmount Boulevard, small farms occupied most of the land until the 1910s, when developers began subdividing the land. They created the now familiar streets, including Bradford Road. However, due to the timing of the various developments, part of Bradford remained a foot path that connected the newly built Canterbury Elementary School to Taylor Road.

After years of failed attempts by Cleveland Heights’ Mayor Cain to extend the road, the city enlisted the help of the Works Progress Administration to construct the cinder path, complete with stone columns at the Queenston Road entrance. The stone columns at the other entrances most likely date to the 1960s or 1970s.

The Cleveland Heights Landmark program celebrates the history of the community, and encourages the maintenance and preservation of its homes and commercial buildings. To learn more about the work of the Landmark Commission, or to nominate a property, contact Planning Technician BreAnna Kirk at bkirk@clvhts.com.

Mazie Adams is a lifelong resident of Cleveland Heights, a supporter of the Height schools, and chair of the city's Landmark Commission.