Another award and a relaunch of the Observer blog 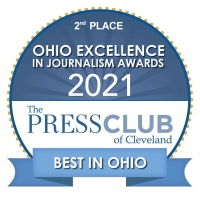 For the fourth consecutive year, the Heights Observer was recognized as one of Ohio’s best community publications in the All-Ohio Excellence in Journalism Awards.

The program is run by the Press Club of Cleveland as part of its mission to recognize the importance of good journalism. With more than 700 entries, it’s one of the largest programs of its kind in the nation.

Much of the credit for producing such a strong community publication belongs to our editor, Kim Sergio Inglis, who works to ensure the paper reads well, is relevant, and reflects a broad range of community voices.

The rest of the credit goes to everyone in the community who contributes in some way—especially those who write articles, but also volunteers who edit and distribute the paper; advertisers who support it; the paid contractors who do layout, bookkeeping, and the other unglamorous parts of publishing; and, of course, FutureHeights, which assumes all the risk and cost to publish the Heights Observer—even during a difficult economy like the past year's.

Thank you and congratulations to everyone who is part of producing this community asset.

In February 2011, we launched the Heights Observer Blog to broaden our capacity for sharing community-based opinion and commentary. Its purpose was to allow people to discuss local issues and ideas in a more casual and spontaneous environment than the monthly printed edition.

Over the next few years, the blog site averaged more than one new post per week, by more than 70 individual bloggers.

I built the original blog site myself, and managed it on a volunteer basis while simultaneously handling the advertising sales that sustain the Heights Observer project. As ad sales (and my own consulting business) demanded more and more attention, the blog site got less and less of it. New posts, site visitors and technical upkeep tailed off. At about this time last year, in a too-little-too-late effort to update the technology behind the site, I managed instead to fatally crash it. It’s been offline ever since.

Now we have repaired and relaunched the blog site, and are again encouraging contributions from community members.

Its focus is the same as always: Life in the Heights. It’s moderated by Vince Reddy, who was a founding board member of FutureHeights and has been an active participant in the Heights Observer project since its very beginning.

His job is to encourage and help people post blogs, maintain order to the extent needed, and troubleshoot as the need arises.

All of the content from the old site has been carried over. There isn’t much new yet, but there is no shortage of local issues, and we hope you’ll consider the Heights Observer Blog a good place to discuss them.

For more detail and instructions, visit the Heights Observer Blog at its new, easy-to-remember location: www.heightsobserver.blog.