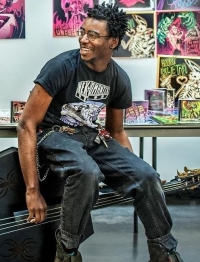 Od Perry-Richardson wears many hats at Lake Erie Ink (LEI), a writing space for youth based in Cleveland Heights. The Cleveland-based artist started as an intern and worked his way up to help organize LEI’s ninth annual Kids’ Comic Con.

Perry-Richardson was an art student at the Cleveland Institute of Art when he first heard of LEI during an internship fair. LEI's booth was one of the last he visited.

“Od approached the table, and he was very excited about the idea of working with young people,” said Jill Levin, LEI's program director. “He wanted to give back.”

“I had spent the week after that contacting the internships I was most attracted to,” Perry-Richardson remembered. “I was about to e-mail Lake Erie Ink when I got an e-mail from Jill asking if I wanted to come on.”

Perry-Richardson started his internship at the seventh Kids’ Comic Con, as a guest artist. Despite initial reservations about teaching, he ended up running a workshop which, as he noted, “went off without a hitch."

"One thing that was heartwarming to hear was after the workshops were completed, the students I had in that workshop loved it," recalled Perry-Richardson. "That’s something I had never experienced before, and it made me realize this is something I wanted to do in the long term.”

His talent as an artist and passion as a teacher helped him take on more responsibilities at LEI.

It has been two years since LEI took him in; Levin noted, “We haven’t been disappointed since”.

Lake Erie Ink will hold this year's Kids' Comic Con virtually, March 19 and 20. It will feature many guest artists, including Brian Azzarello and Alison Bechdel, and programs for kids and adults. To learn more, go to http://lakeerieink.org/comic-con.

Eli Millette works as the communications and outreach director at Lake Erie Ink. He currently lives and works in Cleveland Heights.