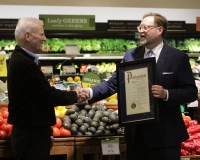 Heinen’s Grocery Store is celebrating its 90th anniversary in 2019. For 60 of those years the family-owned grocer has served the residents of University Heights.

Heinen’s story began in 1929 when local butcher Joe Heinen pioneered the city’s first supermarket by selling traditional grocery items alongside hand-butchered meats. Bringing these two shopping experiences together was revolutionary in the grocery industry, but what truly set Heinen apart was his commitment to quality.

Throughout 2019, Heinen’s will host special anniversary sales and events to thank its customers for their decades of loyalty.