UHFD to get new ladder truck 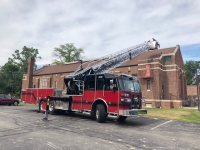 “We’ve been living on borrowed time, and the increasing risk was unacceptable,” UH Mayor Michael Dylan Brennan said. “The new truck will help our fire department with their life-saving mission.”

At a UH City Council meeting on Dec. 3, Fire Chief Robert Perko explained how a tragedy was narrowly averted at a recent Tullamore Road fire.

In that fire, a resident was on the third floor of her home, when fire broke out on the second floor. “When the woman ran down the stairs to escape, she quickly decided to go back to the third floor and await the fire department, because the fire blocked her path,” Perko said.

“It was a good thing the woman was brave and decided to run past the fire to escape,” Perko told city council.

If she hadn't, she would have had to perilously await the arrival of a ladder truck from a neighboring city. Firefighters from Cleveland Heights arrived with its ladder truck 18 minutes later.

Perko said the city’s 26-year-old ladder truck was again out of service for repairs during the Tullamore fire, and noted, “Our fire engine’s ladder couldn’t reach to the third floor.”

If a victim were unconscious, it is likely that multiple ladders of the proper length would be needed,” Perko continued. “Mutual aid ladder trucks were unavailable due to manpower being used on concurrent calls in their respective cities.”

The new University Heights ladder truck will have a 100-foot aerial ladder with a platform bucket on the end to retrieve victims more safely and quickly. It will be able to function as an engine as well as a ladder truck, providing the department more options and flexibility at the site of a fire.