Looking back at a decade of Heights summers 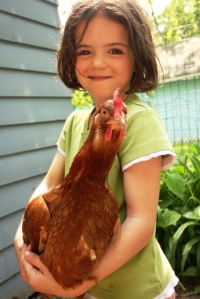 Kara Cicerchi held one of her familiy's chickens during the first Cleveland Heights Chicken Coop Tour. Photo by Gabe Schaffer.

In July summer is in full swing and Heights residents are generally thinking about summer reading programs at the library, concerts at Cain Park and outdoor festivals. July also signals the start of the election season as local candidates seek to connect with residents at block parties. The Heights Observer is often fortunate to have the service of college-age interns during the summer, who enjoy writing about the real-world issues our community faces as a means to sharpen their skills and improve their future job prospects.

By July 2008 the foreclosure crisis had begun to hit the Heights hard, and the top story in the fourth issue of the Heights Observer told how Heights residents were beginning to organize a response. In “Community addresses foreclosure threats,” Ann McFarland reported on a panel discussion organized by the League of Women Voters to discuss the issue, and Judi Miles wrote “Foreclosure and hope in the Heights,” about how the crisis was affecting the value of homes and her outlook on the future of her neighborhood.

In July 2009, intern Kaitlin Bushinski wrote about the CH-UH Board of Education’s decision to hire Doug Heuer as the new superintendent, a decision that sparked protests at a board meeting and mixed reactions from the community because the demographics of the rural community that he hailed from were so different from those of the Heights. Another article reported on a group of concerned residents, calling themselves Step It Up Cleveland Heights, who sought to promote strong leadership for the city by identifying five key issues and recruiting candidates “with new ideas who will promote positive growth and change in Cleveland Heights.”

The Heights Bicycle Coalition formed in July 2010 to promote a more bicycle-friendly city, McDonald’s passed the first of several hurdles to opening a location in University Heights, and a “fracas” at the annual Coventry Village street fair marked the beginning of the end for that long-standing hallmark of summer.

Intern Lewis Pollis wrote about the 16 arrests made at the 2011 Coventry Village street fair and the introduction of a new juvenile curfew proposal in the July 2011 Observer. The street fair has now been replaced by a successful music and movie series in Coventry P.E.A.C.E. Park, but the curfew remains in three Cleveland Heights business districts: Coventry Village, Cedar Lee and Severance Town Center.

In July 2012, intern Yelena Tischenko wrote about the Dog Project, and how a group of Cain Park Neighborhood residents changed a longstanding ban on dog walking in Cain Park. Their goal was to “encourage more neighborhood activities in the park” in order to “reduce crime, increase foot traffic and encourage more families to spend time in Cain Park.” Intern Philip Hewitt encouraged Heights resident to “shop local” in support of the many independent merchants that add character to our community, while intern James Helmsworth wrote about the creation of the 11th National Register historic district in Cleveland Heights, and intern Christina Sanders introduced us to Culture of Cutting, a new business in the Cedar Taylor Business District that is still thriving today.

Articles in the July 2014 issue remembered Rebecca Alison Meyer, a Fairfax Elementary School student who died at the age of 6, and celebrated the naming of Cleveland Heights’ first teen poet laureate, Moonisa Halim.

The July 2016 issue covered Jason Hallaman and Emily Bean's purchase of Mitchell’s Fine Chocolates, enabling a longtime Heights business to continue serving the community. Columnists Carla Rautenberg and Deborah Van Kleef, who began writing during the fight to keep Cleveland Heights’ water public, called to the community’s attention the fact that the city’s building department, which had once had 16 staff members, was now outsourced to a private company called Safebuilt.

Intern Connor O’Brien wrote about Cleveland Heights City Council taking action against the operators of the Arco dumpsite in East Cleveland in the July 2017 Observer. Other articles dealt with such issues as streetscape construction delays necessitating moving the annual Cedar Fairmount festival to the fall, Noble Neighbors hosting a workshop about the future development of the Noble Triangle (Mayfield Road, Noble Road and Warrensville Center Boulevard), and MetroHealth Medical Center expanding its Severance facility with the addition of a short-stay hospital.