Talks of merger, change inspire appreciation for the past 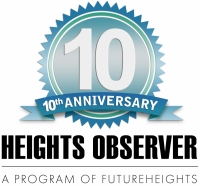 With a declining population in the region generally, and in our inner-ring suburbs specifically, it should be no surprise that consolidation was a common theme in the 2008–17 May issues of the Heights Observer. “Four parishes may be one. Merger plan means Saint Louis in Cleveland Heights will most likely close,” was the headline for the May 2008 issue’s top story. Two Cleveland Heights churches, Saint Ann (at Cedar and Coventry roads) and Saint Louis (on North Taylor Road), merged with two East Cleveland churches, Christ the King and Saint Philomena, to become Communion of Saints Parish in 2010.

The new parish holds services at two locations: St. Ann and St. Philomena, which means that St. Louis did close. But, the building didn’t stay empty for long. In 2011, it was reborn as Imani Temple Ministries. Change doesn’t always mean loss, but it is not an easy process.

In May 2009, during the height of the recession, even municipal governments were talking merger. In a piece entitled “A Dickensian take on municipal merger,” CH Council Member Mark Tumeo argued that city leaders should consider a merger of Cleveland Heights and University Heights. The two cities had much in common, he said, and serving a combined larger population would be more efficient and cost effective. In the same issue, UH Mayor Beryl Rothschild sharply rejected the idea. “We have nothing to gain,” she declared. University Heights was managing itself just fine during the recession. Anyway, she said, UH had more in common with the cities of Shaker Heights and South Euclid—which have a strong mayor system of government—than it did with Cleveland Heights.

While a merger seemed like a nonstarter, UH Councilman Kevin Murphy found out that even talking about collaboration can be difficult. He proposed that certain East Side cities meet to discuss making a bid for an EfficientGovNow grant, but only officials from CH and UH showed up in significant numbers. Shaker Heights sent one person, South Euclid and Lyndhurst didn’t attend, and Beachwood even stated publicly that it wasn’t interested in collaborating.

Now that the immediate crisis has passed and municipalities are healthier again, they have had some success in collaborating on services, such as a joint police-fire dispatch center. Some progress has been made, but it’s not been easy, and no one is saying the word “merger.”

All of this change, and talk of change, may have inspired a new appreciation for our community’s past. In a May 2008 article, “These old houses,” CH Historic Preservation Planner Kara Hamley O’Donnell estimated that 90 percent of CH homes and 50 percent of CH commercial buildings were over 50 years old and might be eligible for listing in the National Register of Historic Places. At that time, CH had eight National Register historic districts, and the article listed four more potential districts in CH and one in UH. Today, three of those four CH districts have now been listed, as has one additional district, Grant Deming’s Forest Hill. What’s amazing is that most of the districts were nominated by residents who initiated the research for their neighborhood, wrote the nomination and shepherded it through the arduous state process.

Heights residents have great pride in their neighborhoods. Celebrating the rich history isn’t so much about mourning what has been lost, but rather recognizing that great change has taken place. The Heights is constantly renewing and reinventing itself—welcoming new people as we appreciate the contributions of those who have come before.