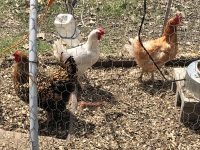 Like their neighbors in Cleveland Heights, residents of University Heights can now keep chickens in their backyards, legally.

After considering the arguments of many proponents and opponents of backyard chicken keeping, University Heights City Council voted 5-2 on April 2 to approve regulations allowing up to 25 residents to keep up to four chickens in a backyard. Councilmen Steven Sims and Phillip Ertel voted against the ordinance.

“Chickens are coming to University Heights, and the sky is not falling,” said UH Mayor Michael Dylan Brennan. “Chicken keeping will be highly regulated, and anyone willing and interested in keeping chickens must do so in a mindful and lawful way.”

Resident Paul Miller spoke out against the ordinance, citing concerns over sanitation, odors, disease and noise, particularly given the relatively small lot sizes in University Heights. “It’s now chic to keep chickens in the city,” he said, “but chickens belong on farms, where there is more land.”

Resident April Urban said that she has no interest in keeping chickens herself but spoke in favor of the ordinance to show support for a neighbor who lives two doors away and wants to keep chickens in her backyard.  “I think that the ordinance does a good job of addressing the concerns that were raised,” she said.

The ordinance states that the chicken-keeping area must be kept in “good repair, maintained in a clean and in a sanitary condition, and free of vermin, obnoxious smells and substances.”

The ordinance also states that the facility “must not create a nuisance or disturb neighboring residents due to noise, odor, damage or threats to public health.” No sale of eggs or slaughtering of chickens is permitted. Similar regulations regarding sanitation and nuisances are in place in Cleveland Heights.

The University Heights ordinance requires that any resident requesting a permit to keep chickens take a course in chicken keeping from either The Ohio State University Extension or Cleveland MetroParks, or some other source approved by the public safety director.

The ordinance sets a limit of 25 chicken-keeping permits that can be issued and in effect at any one time.

Meadowbrook Boulevard resident Laura Francis tried unsuccessfully last year to obtain a variance to keep chickens in her backyard.  Now that the new law is in place, Francis said that she will submit an application for a special use permit.

The city will review the ordinance and its implementation in February 2019 to determine whether it should be retained, amended or repealed.

Robert Brown is a city planner with more than 40 years of experience, including nine years as Cleveland's city planning director. A resident of Cleveland Heights for 40-plus years, Brown serves on the board of FutureHeights.