Jill Barr remembered for her kindness and compassion 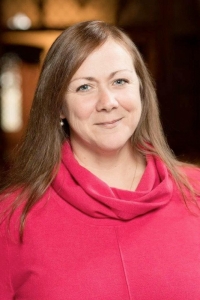 Jill Barr’s smile was legendary. Spreading from her mouth to her eyes, that smile was quick to be offered to anyone who needed it. Her gentle kindness, her bottomless well of generosity, marked a life that was much too short.

The University Heights mother of three died from complications of pneumonia in early March, at the age of 47. But Barr’s legacy lives on in the community that she touched with her grace, selflessness and authenticity.

“I think Jill had a genuine connection with every person she met,” said friend Kristen Sears. “She did things quietly, but she impacted so many people in so many different ways.”

From her work as special projects coordinator at Cleveland Heights’ Church of the Saviour (CoTS), to her fierce advocacy of CH-UH public schools, to her role as honorary mother (and chauffeur) to countless people’s children, Barr “did the work of five people, at least,” said Sears.

“If she could have volunteered 24 hours a day, seven days a week, she would have,” said the Rev. Andy Call of CoTS. “She was a force in her community.”

The gaping hole caused by Barr’s death has reverberated from her hometown in central Michigan to her friends from Albion College, where she studied English, and across this wide community. But nowhere has that loss been felt more profoundly than in the Edgerton Road home she shared with Rob, her husband of 20 years, and their three children.

Barr’s older daughter, Helen, described her as “the most caring person I’ve ever known.” And 12-year-old Tom said, “My mom taught me niceness.”

That sentiment was echoed over and over again by friends, colleagues and even mere acquaintances. Rob was overwhelmed to discover just how many people’s lives Jill had touched. The countless visitors during the three weeks she spent in intensive care “really impacted her care,” said Rob. “I feel like the doctors and nurses saw what an integral part of her community she was.”

Barr coordinated volunteer tutors at Canterbury Elementary School, which all three of her children attended, and ran the Upward basketball program at CoTS. “She didn't give a hoot about sports,” said Call. “But she saw this as another way of bringing people together.”

Bringing people together was perhaps what Barr did best. Her willingness to help—to watch other people’s kids, to offer a word of encouragement, to gather in celebration—“this was just the kind of woman she was,” said longtime friend Carole Dooner. “Just knowing Jill made you a better person.”

Rob and his children are drawing on their memories of Barr’s boundless energy and kindness to help them carry on. Helen and Tom both attended the middle school Model United Nations competition in Columbus mere days after their mother’s funeral, eager for normalcy and not wanting to let their teammates down. Their 10-year-old sister, Emily, performed in Heights Youth Theater’s “The Wizard of Oz” that very weekend. “I felt nervous at first,” said Emily. “But singing and dancing helped me feel joyful.”

Joyful is the perfect word to describe Barr’s approach to life, and she was surrounded by friends, family, music, faith and laughter, up to the very end. “There was always a playful side to Jill,” said Rob. She gave so much to so many, but she too was enriched by that engagement. The love she gave so freely came back to her in spades.

Her family will continue to make music together and will return to some of their favorite spots, including the shores of northern Lake Michigan. But Rob knows he has a tough road ahead of him. “I want them to be well-balanced, good people,” he said of his children. “I just hope this won’t negatively affect their ability to love.”

Those who knew Barr are committed to carrying on her legacy: engaging more with their neighbors, making time to connect with friends, stepping up whenever they see a need. But some holes—and some roles—won’t be so easily filled.

“I wanted to give her grandchildren,” said Helen. “She would have loved that.”

Krissy Dietrich Gallagher is a longtime resident of Cleveland Heights, a graduate of the Heights schools and a former Coventry School teacher. She is a freelance journalist under contract with the CH-UH City School District, and is proud to raise her two sons in this community.