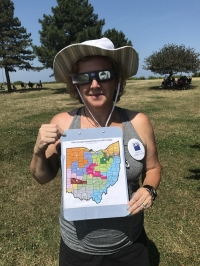 Imagine if the Indians won the World Series and, as part of their prize, they got to make all of the league rules for the next 10 years. They could have all home games, pick the umpires, and make future rules impossible to undo. Such a prize could eventually destroy the sport. This is the outcome of political gerrymandering.

Gerrymandered districts are drawn to favor one political party over another. Voters that disagree with the party in charge are either packed into as few districts as possible or spread out to dilute their voting power. In this way, politicians can pick their voters and create “safe seats” for themselves.

The practice began in 1812 when Massachusetts Governor Elbridge Gerry approved a congressional map that heavily favored his political party. Today, software that can predict voting patterns down to the household has made gerrymandering extremely powerful. Many political analysts believe that “safe seat” districts contribute to the polarization and the dysfunctional gridlock in Washington today.

The U.S. Congressional Districts Map drawn in 2010 breaks Cuyahoga County into four separate districts that stretch into other counties, thus dividing and diluting the impact of the county’s voters.

The CH-UH Chapter of the League of Women Voters of Greater Cleveland, is working with other leagues, Common Cause, and the Fair Districts = Fair Elections coalition to collect more than 30,000 signatures throughout Northeast Ohio, to put a referendum on the November 2018 statewide ballot to end gerrymandering of Ohio’s Congressional districts.

In 2015, a similar ballot initiative targeting the gerrymandering of Ohio General Assembly districts passed by a large margin. For the current effort, a goal of 500,000 signatures is sought statewide to assure the approximately 300,000 valid signatures needed. As of July 20, more than 100,000 have been collected.

The proposed constitutional amendment would require bipartisan approval of U.S. Congressional district maps and the fulfillment of other requirements to assure fair districts. Details of the proposal can be found at www.fairdistrictsohio.org.

After reading an article about the Fair Districts = Fair Elections initiative, Cleveland Heights resident Cristine Rom signed up to volunteer. “Collecting signatures has been an amazing experience bringing me into contact with so many people in the Heights community!" she said. "Whenever I explain that the proposal includes a bipartisan redistricting commission, people's eyes light up—everyone wants our political parties to work together.”

John Donaghue, another Cleveland Heights resident, collects signatures “because the issue is bipartisan and getting it on the ballot is a solid, real thing that can be made to happen . . . just about everybody is sick of gerrymandering, and they’re willing to sign. And the truth is, it feels good to do it—it’s like helping to fix the political infrastructure.”

Voters can find more information about the current petition drive and how to get involved at: http://lwv.org/local-league/lwv-greater-cleveland.

Sue Dyke has been a Cleveland Heights resident for 14 years. She is an empty nester, sports enthusiast and "professional" volunteer.