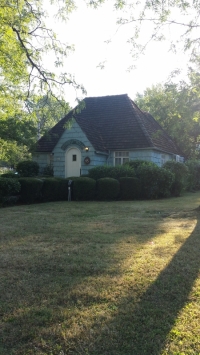 To market the homes and facilitate sales, Rockefeller established the Abeyton Realty Corporation, named after his wife, Abby. A small shingled cottage, designed in the French Norman style, housed the real estate office and welcomed prospective homeowners to the community. Inside, they could learn about the Forest Hill development, including plans for apartments, a country club and inn, a business block and stately homes. Now used by the Forest Hill Homeowners Association as a meeting space, the Abeyton Realty Corporation office was landmarked by the city in 2005.

After years of planning, construction of 81 homes—out of the 600 planned—occurred rapidly between 1929 and 1930.  Unfortunately, a combination of events brought a halt to the sales and construction of the remaining 519 homes, leaving Rockefeller’s plans largely unfinished. By 1933, Rockefeller was actively selling land, finally selling the remaining 650 lots in 1948, 20 years after the start of the project.

Those lots were in demand during the housing boom that followed World War II. Built in a variety of styles, later development of Forest Hill includes ranches and colonial revival homes built with architectural features inspired by the Rockefeller homes, such as slate roofs, attached garages and houses built in pairs of mirror images, updated to suit post-war architectural styles.

The substantial quality and history of this housing stock has the Forest Hill Historic Preservation Society working to expand the National Register District to include the remainder of the community.

One post-war home of particular note is the Morris L. Finneburgh House, designed by architect Albert J. Sgro in 1954. This mid-century ranch was made a Cleveland Heights Landmark in 2002.  Inspired by the designs of Frank Lloyd Wright, Sgro incorporated the home into its surrounding landscape, using redwood and brick building material. The floor-to-ceiling windows bring the outside into the home, and the inclusion of a massive oak tree as the focal point for the courtyard gives the impression that the tree is growing out of the home. The house was originally designed with two master suites for it owners, Morris L. and Frieda Finneburgh, and their son and his wife, Morris L. and Audrey (Page) Finney. Members of the Finneburgh family occupied the home until 1994.

Margaret Lann is a member of the CH Landmark Commission, which preserves and protects buildings, works of art and other objects of historical or architectural value to the community. The seven members are appointed to three-year terms by CH City Council.