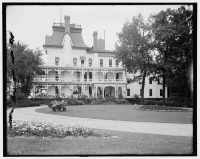 Forest Hill Park is a diamond in the rough. Its National Register of Historic Places designation calls attention to its historic merit, but does not guarantee its preservation. Its upkeep has been a challenge for years, in part because more than half of its acreage is in East Cleveland, a struggling municipality with virtually no budget for maintenance.

Taylor had a hand in designing several Cincinnati parks and the grounds of several notable estates, including Stan Hywet in Akron. Taylor’s Forest Hill Park plan included a number of Olmstedian nods: inward-looking vistas framed by wooded fringes, curvilinear lanes that lent a pastoral effect, a picturesque lagoon and boathouse, and a stone footbridge spanning a valley traversed by a parkway.

Before Taylor worked on the park, Forest Hill’s cultivated grounds were sculpted from the hills overlooking Dugway Brook under the watchful eye of Standard Oil founder John D. Rockefeller.  Rockefeller owned 700 acres of land, including the present-day 235-acre tract occupied by the park.

Originally intended as a “water cure resort,” offering a commanding view of—and breezes from—Lake Erie from its perch high above its gated Euclid Avenue entrance, Rockefeller’s Victorian mansion failed as a resort hotel but served him as a summer home for four decades, starting in the 1870s.

After the mansion burned to the ground in 1917, Rockefeller sold the estate to his son John D. Rockefeller Jr. in 1923. The younger Rockefeller launched a large residential development, also called Forest Hill, on the land a few years later. The Great Depression eroded his plans, but not before his syndicate had built 81 Norman-style houses on tree-lined streets and a French Norman-style gateway commercial center at the corner of Mayfield Road and Lee Boulevard.

After his garden suburb plans stalled, Rockefeller Jr. eventually deeded 235 acres of undeveloped land—the immediate grounds of his family’s former summer estate—in 1939 to the cities of East Cleveland and Cleveland Heights, for use as a shared public park. Taylor’s park plan was to be carried out and maintained in perpetuity through the shared effort of the neighboring communities. Using federal Works Progress Administration funds, available under the Roosevelt administration’s New Deal, more than 1,000 workers set to work building the stone footbridge across Forest Hills Boulevard and a lagoon and boathouse.

In 1967, Cleveland Heights erected the Pavilion, an ice rink, on the southern end of the park. The move was controversial, as the Taylor plan purposely excluded large buildings, but Cleveland Heights needed a site for a recreational building.

Forest Hill Park’s history is a reflection of the fragmented nature of metropolitan areas in the United States, but it retains the potential of one day recapturing its former glory.

Mark Souther is a member of the Cleveland Heights Landmark Commission, which preserves and protects buildings, works of art and other objects of historical or architectural value to the community. Its seven members are appointed to three-year terms by city council.