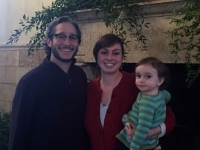 Chef John Bausone, his partner Meghan Gutherie, and their daughter, Patsy, in front of the ballroom's magnificent fireplace. Photo by Deanna Bremer Fisher.

Chef John Bausone and partner Meghan Guthrie had a vision for creating a unique events-based dining experience in a distinctive setting. That vision became a reality in fall 2015 when the co-owners opened Forest Hill Kitchen & Ballroom, in the space formerly occupied by Rockefeller’s restaurant, and before that Cleveland Trust, then Key Bank, in the historic Heights Rockefeller Building on Mayfield Road.

The duo admired the former banking hall’s character, which provides an open and historic venue for both private and public events.

Bausone, a Cleveland native, has worked in the culinary industry since he was a teenager. He attended culinary school in Portland, Ore., and later worked at the famous Biltmore Estate in North Carolina before returning to Cleveland to serve as executive chef at Grovewood Tavern. Cleveland Scene magazine bestowed the honor of Best Brunch on Bausone in 2012 and 2013.

Forest Hill Kitchen & Ballroom can be reserved for special events, with menus that can be specially designed to suit the clients, drawing from a wide variety of food and drinks the chef can prepare.

“We focus on foods that are seasonal, local and fresh,” said Bausone.

In February 2016, Forest Hill began hosting pop-up events, each of which features a menu that is specially crafted around a unique theme.

These pop-ups range from dinners and brunches, to cocktail parties featuring hearty appetizers and specialty drinks. The owners intend the pop-up events to be occasions where community members can come together and try new foods and styles of dining.

On April 14, Forest Hill will host Ramp It Up!, a gala presented by We Are Cleveland Heights. Local chefs, including Bausone, Doug Katz and Bridget Thibeault, will come together to create small plates and craft cocktails for guests to enjoy throughout the night.

Learn more about Forest Hill's pop-ups, including a full schedule of events, and menus at www.foresthillkitchen.com.

Hailey Bickett spent her formative years in Cleveland Heights and now attends the University of Dayton where she is studying communications and photography. She will graduate in May 2016 and plans to pursue a career in visual communications and event planning.