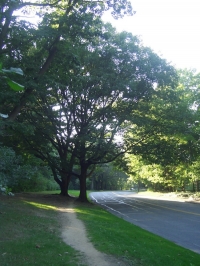 North Park Boulevard between Coventry Road and Martin Luther King Jr. Drive is popular with commuters heading into Cleveland. There are no stoplights on this stretch of road, allowing drivers to quickly get to the hill that descends from the Heights down into University Circle. Even at 35 mph, it’s easy to notice the tall oak trees that line the south side of North Park Boulevard. To see the nearly 100-year-old pieces of history that lie at the base of a number of these trees, however, one must exit the car and take a closer look to find the cement stones with little bronze plates, each bearing an individual man’s name. Who are these men, and why are they being honored on the side of a busy road in Cleveland Heights?

In an August 1918 issue of American Forestry, editor Percival Sheldon Ridsdale praised the concept of “trees for the dead,” stating that the fallen soldiers “are to have living monuments. Their memory will literally be kept green.” He claimed that these “Victory Oaks” would doubtlessly be preferable to “marble columns.” And he noted that “there will be an oak tree planted there for each soldier who makes the supreme sacrifice. It will bear a bronze tablet inscribed with his name and military record. The trees will be, in their very greenness and robust strength, reminders of the youth who gave their vigor to win the war.”

Greater Clevelanders lost little time in making Ridsdale’s vision a reality. They mobilized to such a forceful extent that by Memorial Day 1919, the planting of a long chain of “Liberty Oaks” was already underway. In fact, the plan for Cleveland’s memorial actually began before the war ended. Cleveland Councilman Jerry R. Zmunt, in a July 7, 1918 article in the Plain Dealer, noted: “This is a splendid way of honoring our boys. It is particularly fitting that one of our finest boulevards in the city be chosen. The naming of trees after our dead heroes is the best tribute we can pay them, and their names will thus be perpetuated in a living thing.”

Under the leadership of Zmunt, Cleveland Director of Parks and Public Property Floyd E. Waite, and City Forester Harry C. Hyatt, a path was selected. On July 15, 1918, Ordinance 47590 was passed: “relative to changing North Park Boulevard, running through Ambler Park, Rockefeller Park and Shaker Heights Park from Cedar to Center (Warrensville) Road, to ‘Liberty Row.'” Liberty Row was to begin at Gordon Park by Lake Erie; move down what had been Lower Boulevard through Gordon, Rockefeller, and Wade parks; wind up Ambler Drive into Cleveland Heights; and then continue along North Park Boulevard through Cleveland Heights and Shaker Heights. This path would take advantage of Cleveland’s east side chain of parkland. Additional memorials would be planted and installed later in other areas, including oaks around Sterling Playground at East 31st Street and St. Clair Avenue, and sycamores in front of the Tom Johnson monument on Public Square.

Almost 100 years later, a surprising number of North Park’s Liberty Oaks and plaques are intact. You can also see quite a few along Shelburne Road in Shaker Heights, southeast of Shelburne’s intersection with North Park Boulevard, near Horseshoe Lake. Unfortunately, the trees and plaques along Martin Luther King Jr. Drive have fared less well, succumbing to theft and sudden encounters with out-of-control automobiles. Nevertheless, the spirit of the oaks and the majesty they bring to the area is uncompromised. For many years, the American Legion Glenville Post 130 decorated the plaques. On patriotic holidays, flags are still placed by at least some of the remaining markers.

Christopher Roy is a former president of the Cleveland Heights Historical Society.