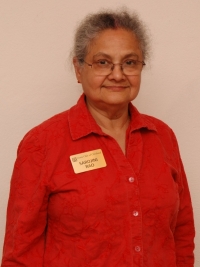 If you drive down Lee Road past Fairfax Elementary School in the summer, you are likely to see Sarojini Rao busy working in the community at the school, where she is the leader. Rao was born in a small town in South India called Udipi. Her father left service in the Indian army after World War II and was given an amount of money that he used to purchase four acres of land in Bangalore in Karnataka State. An engineer by profession, he loved to garden and spent much of his spare time growing things. Rao attributes her love of gardening to her father’s influence.

When Rao was 21, her mother “sent out feelers” to find a husband for her. Eventually, her parents arranged for her to marry the son of a couple who were part of their community. Sridhar Rao was a post-doc in the physics department at Case Western Reserve University. They married in 1969 and the couple moved to an apartment in Cleveland's Little Italy. Rao describes feeling very excited at the idea of moving to America, and her mother, she said, “Strutted around town telling people that her daughter was going to America.”

Even though she spoke English well, having gone to a parochial school run by Irish Catholic nuns, Rao was intimidated by the American accent and was “scared to pick up the phone because [she] couldn’t understand the person on the other side.”

Rao finally found employment in a school in Cleveland and later in Maple Heights. In 1984, a friend suggested she interview with Progressive Insurance and apply for training in its information technology department, even though, as she said, she “did not know the front end to the back end of a computer and knew even less about insurance.” Rao was chosen for the training, and worked for Progressive for 30 years, retiring this past May.

Working outside the home has always been important to Rao, even as a young girl in India. She has been a longtime member of Zonta, an organization created initially for professional women who could not join all-male professional societies. Rao said she values “family, which is very, very important to me; nature; and the ability to think freely and do what I want to do without restrictions.”

Rao and her husband moved to Cleveland Heights in 1972, to an apartment on Parkway Drive, and later bought a house on Bradford Road. Their daughter, Anjali, was born in 1970 and son, Nikhil, was born in 1975. They were both educated in the Heights school system and, after going away to college and to work, both returned to the area to raise their own children.

Jan Kious, resident of Cleveland Heights since 1974, raised four children here with her husband. She is interested in people in the Heights community who fit the description of living "outside of the box."