The porches of August 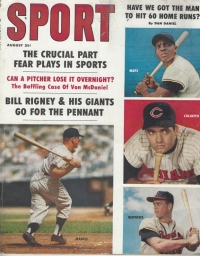 Sport magazine from August 1959, purchased, no doubt, because of the pictures of Rocky Colavito on the cover and inside.

I was sitting on my deck, at the back of my house, communicating on Facebook, when something I read reminded me of the front porches of old, and how, when I remember the one on the house where I grew up, it makes me think of August.

Why August? I’m not sure. Possibly because, after spending about 10 weeks out there, I became aware of the subtle hints of the impending change of seasons, rather than—during the rest of the year, when I stayed inside much more—the big, obvious ones. Being out there every day, I'd notice signs, like the slight thinning of the leaves on our big trees that in June and July had blocked much of the sun from our west-facing upstairs porch. Or maybe it was because I knew, every year from the age of 5 through 18, that the new school year was only weeks, and then days, away, and how I dreaded going back to school every one of those years.

Our house, on Belmar, near Mayfield Road, was not a big one, but the porch stretched across the entire width of the structure, making the porch relatively large. For most of the time I lived there, in the 1950s and ‘60s, the porch was furnished with dark-green-painted wicker pieces that had belonged to my grandmother, probably made in the ‘30s or ‘40s. Besides the couch, two big chairs, table and planter (which my mother had turned into a beverage holder, sometimes filling the galvanized-steel insert with ice and bottles of pop), there was also a “glider,” a suspended couch that swung back and forth.

Until my teenage years, I kept to myself a lot, and I spent most of my summer vacation time on that porch—including sleeping out there almost every night. My mother had put up chicken wire, from the top of the porch’s three-foot wall to the ceiling, convinced that a kid would fall off the porch. Because the chicken wire was always there, we never had the opportunity to find out if she was correct.

At different stages and ages, I spent my time out there reading comic books and Mad magazines (which I bought at one of Coventry Road’s three drugstores—Coventry Drugs, Uberstine’s and Merit Drugs), sorting through that year’s baseball cards, practicing guitar and listening to the radio. These devices started out as big wooden pieces of furniture and, over those years, became smaller plastic boxes and then hand-held transistor radios. There were always one or two stations in Cleveland that played rock ‘n’ roll, with great DJs like the Mad Daddy (Pete Meyers), Bill Randle, Johnny Holiday and Jerry G.

One of Coventry’s drug stores, Merit, also sold records; a metal rack featured the top-40 singles of the day, which they sold at three for a dollar, meaning you got six songs for one dollar, and since most albums then contained 12 songs, that meant you could buy an album’s worth for two dollars, which was about what albums cost at that time.

It was a great day, in mid-August 1957, when I was 8, and a visiting relative handed me a dollar. I walked up to Merit Drugs and bought “Searchin’” by the Coasters, “That’ll Be the Day” by Buddy Holly and “Bye Bye, Love” by the Everly Brothers. I came home and played them, many times, on the little record player I had dragged out onto the porch.

When I was 18, the last year I lived with my family, we moved from upstairs in one house to downstairs in the house next door. There was a reason for that, but when people asked my father about it, he would usually say, “It’s just the gypsy in us.” By then we had a better record player—stereo!—with portable speakers that I’d pull through the front window onto the new porch. Now I was playing albums, not singles, by the likes of Bob Dylan, Ian & Sylvia, the Byrds and the Beatles. Friends and bandmates would come over after band practices or gigs, and we’d sit out on the porch and talk all night until my father, a very early riser, left for work, which reminded us to go to sleep—on the porch.

But something happened. Sometime between playing Dylan records on the front porch, while dreading the new school year, and when I had kids of my own, we all moved to the back yard. We put decks on the backs of our houses. And we stopped hanging out in our front yards, where we used to see all of our neighbors. Now we see only the people we plan to see, and only at times we’ve determined in advance—except in our other neighborhood, Facebook. And we’re missing those spontaneous chats with people, where we used to pick up news and gossip—though we now do that on Facebook, too.

I use Facebook—a lot—and there’s much about it that I find useful and enjoyable. But it will just never be the front porch.