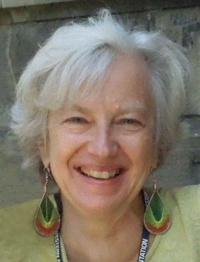 Barbara Bachtell, executive director of Broadway School of Music and the Arts in Slavic Village.

Cleveland Heights resident Barbara Bachtell began steering the venerable Broadway School of Music and the Arts (BSMA) 18 years ago, in the same Slavic Village neighborhood where her mother lived as a baby. Bachtell’s mother, an artist and writer, was descended from Bohemian immigrants who settled there. One of her mother’s first cousins was Cleveland mayor Ralph Perk. As Bachtell put it, “They didn’t agree on politics but enjoyed lunching together occasionally.” Perhaps it was this mixture of art and politics in the family lineage that resulted in one of Bachtell’s brothers becoming The New Yorker’s Talk of the Town cartoonist, another brother becoming chair of the U.S. Communist party, and Bachtell herself becoming an artist and community arts administrator.

Bachtell’s diverse experiences in the arts prepared her for a multi-tasking career at BSMA. She majored in studio art and minored in creative writing at Wesleyan University in Connecticut; worked in Boston as a freelance graphic artist; was a painting major at Cleveland Institute of Art; worked as a gallery assistant at SPACES, and as program assistant for Peoples and Cultures gallery; and had a studio in Little Italy.

She was the second director of the now-defunct New Organization for the Visual Arts’ (NOVA) Cleveland Art Festivals (1981–84), precursors to today’s Ingenuity festival that brings artists and organizations together in downtown Cleveland. She then became NOVA’s first program coordinator when the organization became more focused on direct services to artists, rather than events. She facilitated projects such as slide registry exchanges with Chicago, Boston, and Washington, D.C.; artist open-studio tours; and art in special places programs, bringing artists into hospitals and community settings.

Bachtell is the third director of BSMA, founded in the 1980s as a branch of the Cleveland Music School Settlement. The organization became a nonprofit a few years after its founding, and has continually adapted to a loss of population and decline in the economy. Bachtell’s continual challenge is “How do we sustain this organization when the people we serve don’t have the resources to pay?” Like many small nonprofits, BSMA has a diverse revenue stream, but Bachtell especially credits Cuyahoga Arts & Culture public funding as “our saving grace.”

BSMA partners with neighborhood organizations, including Community Assessment and Treatment Services, a substance abuse rehabilitation center. Its program alternates weekly drum circle and dance classes. For seven years, BSMA has brought Suzuki violin classes to Villa Montessori school, which is closing after 20 years. A third program is after-school art and music classes at University Settlement, a neighborhood center that provides social services to residents of the Broadway-Slavic Village neighborhood. Bachtell said that BSMA also has a “wonderful relationship with the Cleveland Orchestra,” which held its third neighborhood residency in Slavic Village with free kick-off concert. BSMA has always offered on-site music lessons, both instrumental and voice, and a youth drum corp.

Special projects, such as Rooms to Let: CLE, bring a sparkle to Bachtell’s eyes. In the spring of 2014, she was one of three curators for this project, which brought site-specific installations into three vacant houses in Slavic Village. “It was a terrific experience,” she said. “I ended up with 20 artists in the house I curated (which, alas, was later demolished, despite its ‘good bones’), along with photos from the 1930s and ‘40s showing the house’s original residents in the very spaces the artists altered.”

Bachtell is nourished by a leadership program of the National Guild for Community Arts Education. “You must nurture yourself as a person and learn what your values are to be an effective leader,” advised Bachtell. “A leader is different from a manager—as a leader you bring people together.” Today, Bachtell said, she is “trying to integrate my artist-self with my administrator-self,” and trying to find the time to work on her studio art while bringing arts to the Slavic Village community. Truly, Bachtell is a shining star on Broadway.