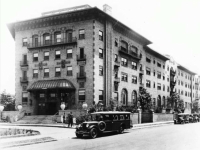 In the 1920s, Spanish and other Mediterranean architectural styles permeated American design. As Michael Rotman, Cleveland Heights Historical Society’s executive director, discovered, Shaker Heights architect Bloodgood Tuttle, like his clients the Van Sweringens, disapproved of Italian- and Spanish-style houses being built in Cleveland. Tuttle declared them “better left in Florida and California” because “they are intended to keep out the sun while we want to let it in.”

If Mediterranean styles were better suited to the nation’s semitropical margins, they nonetheless crept into Northeast Ohio. The Alcazar Hotel, a designated Cleveland Heights Landmark property since 1978, is among the region’s most notable Mediterranean-influenced buildings. It dominates the skyline of the Cedar Fairmount Business District, which is usually more noted for its Tudor Revival details.

Cleveland Heights’s Alcazar was inspired by the Alcazar Hotel and other Spanish-Moorish themed hotels in St. Augustine, Fla., that railroad magnate Henry Flagler built in the late 19th century, and which themselves emulated designs from Seville, Spain.

The five-story, pentagonal Alcazar opened its doors in 1923. Over its lobby entrance, an inscription reads, “Esta es su casa de usted,” which translates to “This is your home.” Like many other residential hotels and grand apartments of its era, the Alcazar was originally pitched to upper-middle-class residents who would be thankful for the convenience of housekeeping services that otherwise required hiring a servant.

Besides offering modern domestic conveniences, the Alcazar also rented out rooms to out-of-towners. It became a favorite haunt for a number of celebrities who visited Cleveland, including George Gershwin, Jack Benny, Cole Porter, and Cleveland’s own Bob Hope. Porter is said to have written “Night and Day” at the Alcazar.

Inside, the Alcazar features colorful mosaic tile designs and a small fish pond at the center of its large, hexagonal lobby, modeled after Flagler’s Hotel Ponce de Leon. An interior courtyard evokes both the Flagler resort hotels and Spanish designs that inspired them. It features decorative plasterwork done by Fischer and Jirouch, a Cleveland-based company that is now one of the largest (and among the last) surviving ornamental plaster design firms in the United States.

The postwar years were unkind to the Alcazar. Residential hotels remained familiar and widely accepted residential options in larger cities, such as New York, Chicago and Boston, but in Cleveland they never reached the same heights of popularity and lost their appeal as many people cast their eyes toward single-family living on the new suburban horizon. The Alcazar became careworn and lost its reputation as a haven for prominent socialites.

Since 1963, the Alcazar, operated by the Western Reserve Residences Co., an affiliate of the Christian Science Church, has served primarily as apartments for retirees, but has always kept a few units open to the public on a bed-and-breakfast plan. The building’s recent sale to a local investor, Kirt Montlack, hopefully promises sensitive attention to upgrading its facilities in a manner consistent with best practices in historic preservation.