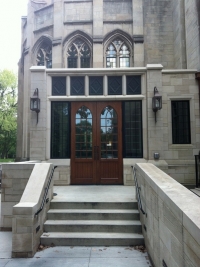 The new McCracken Entrance, named for one of St. Paul's rectors, blends well with the original architecture, an example of sensitive additions and alterations that the CH Landmark Commission approved.  Photo by Mark Souther

One of five properties added to Cleveland Heights’s Landmark registry in 1976, just two years after its inception, the St. Paul's Episcopal Church Group is a familiar presence at the intersection of Coventry Road and Fairmount Boulevard.

St. Paul’s congregation, like that of many longtime congregations, predates its current home. It emerged in 1846, occupying rented space until its first dedicated building opened two years later at the corner of Sheriff Street (now East 4th) and Euclid Avenue, on the site of the present-day Corner Alley Bowling Lanes.

Following a devastating fire, the church rebuilt a brick Gothic edifice that opened in 1849. As commercial expansion accompanied the emergence of downtown Cleveland in what had formerly been a compact walking city, St. Paul's moved in 1876 to a newly built Gothic church at the corner of Case Street (now East 40th) and Euclid, eventually bordering Cleveland's famed Millionaires' Row. This church was designed by Gordon W. Lloyd, an English-born Detroit architect who also designed many other Episcopal churches in the Midwest.

At its new location, St. Paul's expanded impressively and spawned several other new congregations as it grew.

By the 1920s, many St. Paul's parishioners had moved into the nearby suburbs of Cleveland Heights and Shaker Heights. In 1928 the church followed suit, choosing a site on the eastern edge of Barton Deming's Euclid Golf allotment on Fairmount Boulevard, the "Euclid Avenue of the Heights."

The new building, designed in the English Gothic style by J. Byers Hayes of the Cleveland architecture firm Walker & Weeks, was erected of Indiana limestone. St. Paul’s previous building was sold to the Cleveland Catholic Diocese and reopened in 1931 as St. Paul's Shrine of the Blessed Sacrament. In recent years that building has served as home to multiple Catholic orders rather than as a diocesan church.

In Cleveland Heights, St. Paul's continued to grow, but its building remained unfinished, a casualty of the Great Depression. Originally to include a large nave for worship services, St. Paul's made do with holding services in its parish hall until 1951.

By the time the church raised sufficient funds to build the Gothic nave envisioned back in the 1920s, its leaders opted instead to follow an emerging trend toward fashioning naves in the manner of the early Christian church, in which ornamentation was spare and the altar was moved closer to the congregation.

By the early 1960s, St. Paul's flourished under the energetic leadership of Dr. Chave McCracken. During his tenure as rector, St. Paul's became more consciously inclusive. In spring 1963 it hosted Dr. Martin Luther King Jr., who gave one of the speeches that led up to his famed Lincoln Memorial address later that year.

Church membership reached its peak in the 1960s, with the main Sunday service splitting into two services to handle the growing parish. Years later, following a downward trend in both Heights population and in membership in mainline Protestant denominations, St. Paul's returned for a time to a single service. More recently, it restored the separate services as part of a determined effort to attract young families.

Today, St. Paul's remains a vibrant part of Cleveland Heights and, with some 1,800 parishioners, is the largest Episcopal congregation in the Diocese of Ohio.

The recent restoration of Tucker Hall (the original 1928 sanctuary) and addition of the new McCracken Entrance, on the church group’s north side, earned St. Paul’s a City of Cleveland Heights Preservation Award in 2013.