Raymond Bugelski's art is on the streets 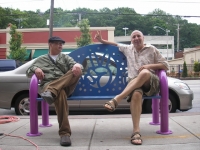 Raymond Bugelski and Steve Presser (of Big Fun) on the Coventry "Peace" bench.

One idea in the minds of Heights Arts’s founders 15 years ago was that a city of creative residents should reflect that creativity in its streetscape. Today, Cleveland Heights is unique in the region, with murals, signage, fences and benches designed and implemented by artists who live here. One such artist is Raymond Bugelski, who designed the iconic Coventry benches and street signs, as well as the signage in the Cedar Fairmount Business District.

Bugelski first encountered the concept of public art at Cleveland State University in the 1970s, when he organized an ice sculpture competition at a public library as a class assignment. He quickly realized that public art was a lot more than art. The project involved organization and involved the public, not just aesthetically, but “from the heart.” It even necessitated buying gloves for the 60 children who joined professional artists in participating.

Bugelski said that, for many years, he “misplaced where my creativity was coming from,” and embodied the romanticized figure of a drug-addicted artist. “One of the things I needed to see was if I could be creative” without drugs, he said. Now, clean and sober for 23 years, Bugelski credits getting back into the arts as part of his recovery.

One of his first professional public art projects was the skate park fence built for the 2002 Gravity Games held in downtown Cleveland. He particularly enjoyed the irony of a flame design on a fence positioned at the mouth of the now-healthy Cuyahoga River that famously caught fire from pollution in 1969.

Bugelski has also worked as a fine artist in the studio, where his aesthetic is his own. “But public art is not about me,” he said. “I have to be considerate of the environment, the public, and the budget. It’s not about Raymond making a statement.” Perhaps that is why the projects he’s done in different neighborhoods bear no resemblance to one another, except for being well-designed, distinctive and site-specific.

For example, the signage that he designed for the Cedar Fairmount intersection is based on its unique Tudor architecture, while the benches on Coventry Road look like they stepped out of its colorful 1960s past. “The idea of neighborhoods makes me smile, and especially that each has its own identity,” said Bugelski.

Bugelski works in a Cleveland Heights home studio as a fine artist and as a freelance designer, creating public art, websites, logos and identity packages for small businesses. Bugelski and his wife, artist Haley Cavotta, moved here from Tremont in 2002 to buy a home, not expecting that the Heights would provide opportunities to be creative. Within two weeks, recalled Bugelski, “this lady” called him from Heights Arts to discuss the Coventry bench project, based on his reputation as the Gravity Games skate park fence artist. And today, Cleveland Heights’s most vibrant streetscapes reflect the creativity of the community through Bugelski’s vision and talent.