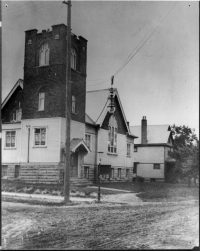 In the summer of 1981, the choirs of St. John's and St. James A.M.E. churches, two historic African-American congregations on Cleveland's East Side, joined together in the octagonal sanctuary at the inaugural service of Christ Our Redeemer A.M.E. Church. Named after the African Methodist Episcopal motto, "God our Father, Christ our Redeemer, and Man our Brother," this sacred landmark was originally dedicated as Cleveland Heights Methodist Episcopal Church on Sept. 18, 1904. The clapboard- and shingle-sided Gothic Eclectic building, distinguished by its rare (for its time) octagonal sanctuary plan and battlemented corner tower overlooking Superior and Hampshire roads, is the oldest standing house of worship in Cleveland Heights, and has been a designated Cleveland Heights Landmark since 1995.

Cleveland Heights Methodist Episcopal Church arose from efforts of the Nottingham-Glenville Circuit of the Methodist Church, which erected an earlier brick church near the old Superior Schoolhouse, in 1878. At that time the surrounding area was still derisively dubbed "Heathen Heights" because of the notorious weekend carousing of the area's stone quarry workers.

A notable feature inside the church is a large stained-glass window dedicated in memory of parishioner James B. Haycox, a dairy farmer and bluestone quarry operator whose Lee Road farm became part of Grant Deming’s Forest Hill allotment. Another feature given in memory of Haycox is the church’s pipe organ, assembled with wooden pegs and no nails. More than a century later, its pipes’ hand-stenciled floral decorations retain their soft beauty.

After quintupling its membership in just two decades, the church’s congregation departed to a massive new French Gothic building on Lee Road in 1927 and became the Church of the Saviour. Thereafter the old building housed the First Church of the Brethren for the next several decades. Just as the soaring suburban population of the Heights in the 1910s–'20s made the little church too small to hold Sunday services, the growing African American presence in north-central Cleveland Heights, drawn to better housing from Glenville and East Cleveland in the 1960s–'70s, made the area a logical place for the African Methodist Episcopal Church to create its first suburban mission in Greater Cleveland (apart from the longstanding New Bethel A.M.E. in then-rural Oakwood Village).

Christ Our Redeemer A.M.E. emerged as a joint project of the ministers and laity of the North Ohio Conference of the African Methodist Episcopal Church. The mission leased its building from First Church of the Brethren and opened with a mere seven congregants in July 1981. Originally it held services at odd times to encourage members of other A.M.E. churches to assist in getting it firmly established, as well as to enable guest pastors from other A.M.E. churches to preach there.

Today, Christ Our Redeemer A.M.E. Church faces the daunting challenge of maintaining the oldest church building in Cleveland Heights. Sharing Superior Road with the Preyer House (the city's oldest residence) and Superior Schoolhouse (the city’s oldest school building), Christ Our Redeemer is a critical marker of the community's early history. As a pioneering suburban black church, it is also a significant landmark in the struggle to break down metropolitan racial barriers.