Tamar Gray is a musician and educator 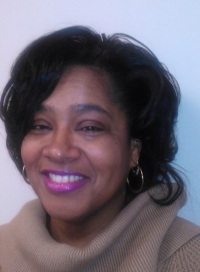 Tamar Gray is a talented member of a musical family dynasty. Her grandfather, Clark "Deacon" Hampton, was a self-taught musician who moved his wife and 12 children from Ohio to Indianapolis in 1938. For decades, the whole family toured as the Hampton Family Band and second- and third-generation Hamptons are still performing today. Notable among them are Gray’s uncle Slide Hampton, a trombone player and composer, and brother Pharez Whitted, the Chicago trumpeter. Gray and her husband, Leonard, who have three grown sons and four grandchildren, perform together for parties and weddings as Etiquette. Leonard also plays locally at Rockefeller’s with the Lenny Gray Trio and elsewhere with the Totally Rhythm Syndicate.

Gray’s musical training began when she was a toddler, and she always wanted to be a performer. But her mother, who had grown up in the traveling family band as one of the dancing and singing Hampton Sisters, advised her to “do it on the side” and get an education.

Today, Gray is the music teacher at Fairfax Elementary School, imparting her love of music to the next generation, and also fulfilling her dream to perform in supper clubs such as the world-famous local music venue Nighttown. Gray loves living in Cleveland Heights because it is like her hometown of Indianapolis: arts- and music-centered.

She won a place at a high school for performing arts with an audition of “Somewhere Over the Rainbow,” and, after three years of free voice lessons there, won a scholarship to college with “Send in the Clowns” and “Caro Mio Bien.” Gray is musically inspired by the smoothness of Sarah Vaughn, Ella Fitzgerald and Barbra Streisand, but Tina Turner and Gladys Knight flavor her performances.

Gray is “an expert at knowing how to engage young minds and how to use music to develop children,” according to Susie Kaeser, retired founding director of Reaching Heights. Belying her vibrant youthful appearance, Gray exclaimed, “My first students are in their 30s!” She said of her students, “I want them to become citizens of the world who love music,” and added that she hopes to one day hear them say, “I’d like to thank Mrs. Gray for showing me music was FUN.” If a recent winter concert of fourth- and fifth-graders is any indication, music is very fun for her students. Gray oversaw their performance with just the right mix of discipline and expression, letting their exuberant singing overflow with motion and joy.

Gray advocates for music education, and education in general, through involvement and leadership in many organizations. She is the Second Vice President of the Cleveland Heights Teacher’s Union and a member of the teacher licensing committee; sits on the executive board of the Ohio Federation of Teachers; and facilitates Reaching Heights’s Summer Music Camp and the upcoming all-district Reaching Musical Heights at Severance Hall. She also serves as assistant pastor of the Edgehill Community Church.

At the recent winter Fairfax Elementary School concert, Gray told a story of teaching the children “Blackbird” by Paul McCartney. One fourth-grader went home, looked it up on YouTube, and watched it over and over. “It touched my soul, my heart,” he told Gray. Exactly.

Upcoming music with Tamar Gray and her students include the following shows:

Wednesday, Feb. 25, 7 p.m., at Nighttown: Tamar Gray will perform as a member of the Klezmer Guy Trio (admission fee).