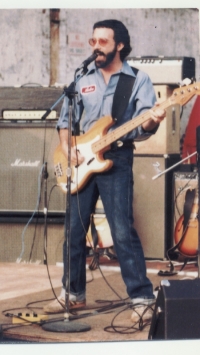 This 1969 Moby Grape song has been playing in my head a lot lately. It starts with the words “Changes, circles spinning. Can’t tell the ending from the beginning.” Many other popular songs carry the same message—like Joni Mitchell’s “Circle Game” and “Circle of Life” from “The Lion King”—because while the experience is one that’s common to most of us, it’s also still sort of a phenomenon: the realization that a lot of our important occasions repeat in different (or, sometimes, the same) ways; that some significant life-cycle events eventually come “full-circle.”

During all the years I worked full-time as a rock musician, I had to work various day jobs to be able to afford my so-called “full-time” music career. Those jobs always involved food—cooking in restaurants and for catering companies, in a hospital kitchen, and other culinary institutions. My favorite of those jobs was at Rocco’s Market in Coventry Village in the middle and late 1970s. Rocco’s was a gourmet deli and produce shop in the structure that had housed the garage for the former apartment building that became CoventryYard (the space now inhabited by the Grog Shop and the Inn on Coventry).

I worked there during the day and then I’d go home and write music and practice guitar, and at night I’d play somewhere with my band—under the stage name Baxter Shadowfield—or rehearse or record with them. So when my friends Billy and Michele Buckholtz opened the Murray Hill Market—a place very much like Rocco’s Market—in Little Italy four years ago, I started cooking there. It was soon after I’d signed with a publisher to write a book, and at a time when much of the freelance magazine writing I had been doing disappeared due to the economy.

Billy Buckholtz is also a professional musician (a founding member of the 40-year-old band Wild Horses), and one who, like me, started playing professionally at an early age. That’s how I met him: We both played at places like Faragher’s, a folk club on Taylor Road near Cain Park, and at La Cave, the folk club in University Circle, when I was in school at Heights High and he was in junior high at Wiley.

So here I am, in 2015, working in a place very much like Rocco’s Market, three or four mornings a week (with a guy I knew from my early years in music, and with whom I later played music), and then going home to write, and, often, rehearsing or performing music at night.

It’s as if nothing has changed. Except that this time around I’m a grandfather—as of a few weeks ago. And that’s another full-circle event: This guy who used to be a baby—my son—now has a baby of his own. I know this has been happening for millions of years, but it’s the first time it has happened to me. As the Beatles sang: “La la, how the life goes on.”

What's next? Maybe someday I'll become a great-grandparent, like my mother is now.

“Changes, circles spinning. Can’t tell the ending from the beginning.”