What I did and didn't learn at Heights High 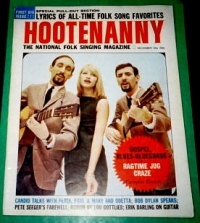 A Hootenanny magazine from the early 1960s.

I told my father that when I grew up, I wanted to get a job thinking. He said, “Good luck.” But, really, that’s what my jobs as a writer and a musician are—thinking. The writing and performing parts come last, after a lot of thinking.

That conversation with my father took place 50 years ago this month, in September 1964. It was a sunny Sunday following my first week of high school, at Heights High, and I started out with some vague notion of trying a little harder that year to stop being such a terrible student.

I sat down in my room to read a chapter in my history textbook, about which I was then supposed to write a paper. I read the chapter and then started on the paper, by which I mean I started thinking about it. But my eyes fell on a magazine I’d recently purchased called Hootenanny, about folk music and musicians.

What caught my eye was a photo of a beautiful and talented folksinger named Carolyn Hester, who was one of the first female folk stars. She was also responsible for Bob Dylan getting signed to Columbia Records. I started reading the magazine and decided, as I always did, around that time every year, that I didn’t really care about the homework assignment, or school, and I picked up my guitar and started working on a song I was writing.

When my father came home and checked on my progress, we had this discussion—the one that ended with him saying, “Good luck.” During that conversation, I made my monthly suggestion that I might be better off quitting school and working on my music career. I had been playing music professionally since the age of 13 or so, and I’d been asking about quitting school since the seventh grade. I always knew what the answer was going to be, every time, until I turned 18 and became legally allowed to quit school, which I did.

But I didn’t quit on my 18th birthday, in late May 1967. I waited a couple of weeks. I waited until all of the Heights Choir activities—the concert, the recording, the awards dinner—were over. Because also in September 1964, I discovered Heights High’s vocal music department and decided I wanted, or, actually, needed to participate in it. And later, when I got into the Heights Choir, that changed my life forever. It was the one and only reason I ever entered the school building. And I had to keep my grades at a C level to stay in Choir. And I also had to not do all of the things most of my friends were doing.

The Choir’s director, Clair T. McElfresh, whom we all called Mac, was not only a dynamic and inspiring director and teacher (if a little crazy at times, like all great high school choral directors), but he was also one of only two teachers in all of my 13 years of school who actually encouraged me to do, well . . . anything—in this case, music. (My ninth-grade English teacher, Mrs. Bossinger, encouraged me to continue writing.)

A year after I left Heights, I was working in the music business in New York. I’m still in the music business. And I’m also a writer—sitting around thinking. I write a lot about music and musicians, and, ironically, several years ago, I wrote about Carolyn Hester and have since become friends with her.

A few years ago, I tracked Mac down—he was semi-retired and living in Florida—and I called him. We talked on the phone for 45 minutes, and I got the opportunity to thank him for saving my life. I’m happy about that for several reasons, one of which is that Mac died a few months ago.

My experience is not unique, though. I think that every year some kid, or more than one kid, at Heights High who is not too engaged or interested in doing schoolwork, is inspired enough by something like music, visual art, or drama to stay in school.

Heights High has always excelled in its music and art instruction. I was lucky to have benefitted from it. That’s why, about 15 years ago, I saved the Heights High Vocal Music Department. But that’s another story. I should start thinking about that one.