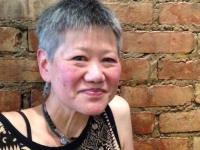 “Some artists' work is like a car tooling down the road—it heads out in a specific direction, and there may be twists and turns along the way, but it always follows a single path from one end to the other. Others (daVinci was one) work like trees—along this branch, along that branch, along another branch . . . simultaneously, wherever the muse touches. No, I'm no daVinci, but I most certainly am one of the Tree People.” —Jeanetta Ho's website.

Hawaiian-born visual artist Jeanetta Ho has lived in Cleveland since 1971. “I wasn’t supposed to be an artist. I was supposed to marry well,” said Ho. Although she studied photography as early as high school, her aptitude in math (“I was a math genius”) landed her in engineering school during the Vietnam War era. But calculus stumped her, and she changed her major to art.

Like most colleges at the time, the University of Hawaii campus was in turmoil, and after the Kent State shootings, Ho and her then-husband dropped out of school and moved to Canada. They eventually came to Cleveland to live with a relative, and, although the marriage dissolved, she has been here ever since.

Ho’s abilities and experiences do indeed reflect the concept of a Renaissance artist who uses a broad base of knowledge and skills. When she moved to Cleveland, Ho trained for and worked as an x-ray technician. Then she was a 100-word-a-minute typist for the Light of Yoga Society and other clients, establishing a pattern of working lucrative but part-time jobs to free her to make art.

Next, she began working for local commercial photographers as an assistant. She used the technical aspects learned from them in her own art photography. She became a freelance photographer, both taking assignments and pitching stories for publications such as the Sun Press, Crain’s and Ohio Magazine.

Another part-time job, sewing beads with Cleveland Institute of Art (CIA) students, opened up to her the possibility of attending art school. Ho was admitted to CIA with financial assistance available to older students, and skipped the first year due to her experience.

She started in the fiber department, but visiting artist Dorothy Gill Barnes inspired her to travel along another branch. Ho assisted the Columbus sculpture and fiber artist at a summer workshop and embarked on a continuing interest in using natural materials. Another influence was June Bonner, who taught papermaking using milkweed and other local plants.

In 1996, Ho graduated from CIA with a major in sculpture and “with a huge vocabulary of art.”

Subsequently, Ho earned a master’s in art education from Case Western Reserve University, briefly taught in the Cleveland public schools, opened a gallery, and closed it after a year and a half, and cold-called Cleveland Opera for a job. She used all of her skills working as a stagehand for Cleveland Opera and then for Tri-C for eight years. She could solder, sew, paint, do electrical work and lighting, move scenery—“I could make anything!” Ho said.

But at age 60, with unfinished projects beckoning from her garage and the work taking a toll on her body, Ho retired to make art full time. At 64, she said, “It takes a while to hit your stride, and I haven’t hit my stride yet.” She works every day and sells her pieces at fairs and farmers' markets, both in the summer and at holiday time. She makes art pieces for galleries and inexpensive items for the fairs. Both incorporate natural materials, such as locally sourced bark and wood. Ho’s jewelry is often made from buckthorn, an invasive plant, and she has a line of wind chimes made from bicycle parts.

Equipped with abilities in many media and an infinite imagination, Ho said, “Technique doesn’t rule—I feel I can do anything.” Examples of her work and a schedule of fairs can be found at www.jhos.net.