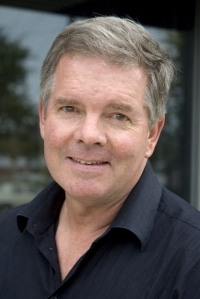 Poet George Bilgere, who began college as a pre-med biology major and played professional racquetball after grad school, has read his poetry on “A Prairie Home Companion” more times than his good friend Billy Collins, poet laureate of the United States from 2001–3. But who’s keeping score? (“Billy is very bitter about it,” reports Bilgere.)

Born in 1951, Bilgere grew up among book-covered walls in St. Louis. He remembers walking to the library to fill a wagon with books on summer weekends and becoming a voracious reader of novels. He had some thoughts about writing, but, having done well in biology in high school, entered the University of California, Riverside, as a pre-med student. Unfortunately for medicine, Bilgere “had a problem with chemistry.” His advisor told him to drop the course for an elective, a “no-brainer such as creative writing.”

The course was a life-changing one. Bilgere had never read, let alone written, contemporary poetry. His first poem was about a Mr. Mikle. Bilgere talked to the elderly man daily when he worked as a feeder in a nursing home for two summer months, a job he found both troubling and exhilarating. He also found the class reaction to the resulting poem exhilarating. In biology, he was just another kid in a seat. In poetry, he received “that all important thing: praise.” He also found the choice between pre-med students gathering in study groups, and poets gathering in coffee shops and bars, a "no-brainer." He changed his major.

Bilgere went on to receive his master’s degree at Washington University, where he studied with Howard Nemerov, a Pulitzer Prize-winning classical poet. He received his doctorate at Denver University and then embarked on a 10-year career as a professional racquetball player, a sport he had played in college. He was, perhaps, the only poetry-writing racquetball player.

Next, a Fulbright scholarship took him to Bilbao, Spain, which was at the time “untouched by the rest of the world.” He met artists and terrorists, categories that merged as artists became radicalized by politics. This period was the first time that Bilgere felt part of something larger than ordinary life, and during those years he traveled throughout Europe, bonding particularly with Germany. He returns annually to Europe, and, although he now feels “like a dinosaur,” he is renewed and excited by the creativity and entrepreneurship of YUCI, or young urban creative internationals, in East Berlin.

Bilgere published his first poetry collection, The Going, in 1995. “Most poets writing books are read by no one,” he said, and his was no exception until a divorce inspired a watershed collection written in 2000. Contemplating the wreckage of his life, and with no summer plans, he decided to intentionally write himself through his feelings. He stayed with his sister in Santa Cruz, and for the first time dedicated himself to writing. Also for the first time, he put aside the tradition of “poetry as serious stuff,” and allowed his natural humor to appear. He had fun, even writing about his divorce. When he finished the collection, he submitted it to the Akron Poetry Contest, not even knowing who the judges were.

This is what happened the day Bilgere's life as a poet changed: He was watching Adam Sandler in “The Waterboy” with his young nephews. The phone rang, he answered it, and the caller asked for him. When he verified he was, indeed, Bilgere, the caller said, “This is Billy Collins.” Bilgere frantically waved to the boys to turn down the volume, not wanting Collins to know he was watching an Adam Sandler movie. Collins told him that he had picked him to win the Akron contest, adding, “Oh, I am the U.S. poet laureate.”

By shining a light on Bilgere, Collins changed his life. He introduced Bilgere to National Public Radio’s Garrison Keillor, leading to a “whole career as someone known." For Bilgere, it meant, "Instead of 15 people reading your poetry in a little journal,” thousands of people hear it and read it. He has appeared on Keillor’s “Prairie Home Companion” 43 times, more than any other poet, and for three weeks was the top-selling poet on Amazon.

He is also a local treasure, having won the Cleveland Arts Prize in 2003 and a Creative Workforce Fellowship in 2014. In January 2014 he published Imperial and got an agent who books readings for him throughout the country.

Bilgere has taught at John Carroll University for 20 years and lives with his wife, Jodie, and 14-month-old son, Michael, in Cleveland Heights. Needless to say, being an older father with a young child is inspiring his art. Stay tuned (particularly to NPR), and check out www.georgebilgere.com for more information.

My father would lift me
to the ceiling in his big hands
and ask, How’s the weather up there?
And it was good, the weather
of being in his hands, his breath
of scotch and cigarettes, his face
smiling from the world below.
O daddy, was the lullaby I sang
back down to him as he stood on earth,
my great, white-shirted father, home
from work, his gold wristwatch
and wedding band gleaming
as he held me above him
for as long as he could,
before his strength failed
down there in the world I find myself
standing in tonight, my little boy
looking down from his flight
below the ceiling, cradled in my hands,
his eyes wide and already staring
into the distance beyond the man
asking him again and again,
How’s the weather up there?

Peggy Spaeth was the founding director of Heights Arts. She is currently imagining and exploring new projects.