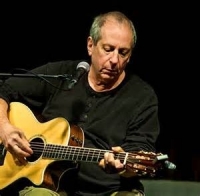 When I was in 10th grade at Heights High in 1964, I took a trip to New York City. While I was there, I went to the famous Café au Go Go to hear this band I’d heard about, the Blues Project. I thought it was going to be an acoustic group because the one member I’d heard before—Danny Kalb—had appeared a year or so earlier on a compilation album, also called "The Blues Project," which featured several young, white acoustic blues artists.

When the band appeared on stage, I was shocked—and disappointed—to see that it was a rock band. But when they started playing, right from the very first note, I was completely mesmerized and enthralled.

That didn’t go away—not through the band’s show that night, nor through the many other Blues Project shows I attended, at Cleveland’s legendary folk and blues club La Cave and in New York.

I joined a band in high school that tried to play Blues Project songs. We got a chance to play at La Cave, but opening for another band, not the Blues Project.

I tried to learn as much as I could about each member of the band, which was not easy back then, before the Internet, and I studied each guy in the band every time I saw them play. One of them, rhythm guitarist and vocalist Steve Katz, seemed like a really nice guy—and funny—but there was no way for me to really know that—until now.

I just got off the phone with him, and guess what! He’s a really nice guy—and funny!

Katz is coming to Cleveland Heights to give a concert on Saturday, June 21, starting at 7:00 p.m., at the Unity Center of the Heights (2653 S. Taylor Road, at Fairmount Boulevard). His show is a combination of spoken word and music. He tells fascinating, and funny, stories of his amazing career: taking guitar lessons as a teenager from the legendary Rev. Gary Davis; forming the Elektra Records group the Even Dozen Jug Band, which also included future stars John Sebastian and Maria Muldaur; joining the Blues Project, whose last gig was at the most significant rock festival in history, Monterey Pop; launching the multimillion-selling pop group Blood, Sweat and Tears; starting the band American Flyer, which was produced by the Beatles’ producer George Martin; producing two of Lou Reed’s most successful albums; becoming an executive at two record companies; and more. And he sings corresponding songs.

There’s an opening act for this concert, too. It’s a 1960s-style folk group called Long Road. I’m in that group. So I’m finally opening for Steve Katz. It only took 50 years!