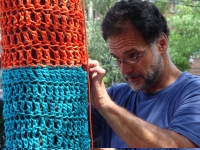 Ben De Rubertis’ interests are archaic, obscure and utterly relevant. His world ranges from sitting at a drawing board hand-lettering calligraphy in Cleveland Heights, to portraying an 18th-century French-Canadian fur trapper as a historical interpreter at Hinckley Lake, to collaborating with local artists in collective projects in India.

His unusual vocation as a calligrapher began when he graduated from the University of Dayton with a degree in accounting in 1980. His father, Ben Sr., was in business as a calligrapher and had recently lost his assistant. Ben filled in, and for the first year drew pencil lines for his father’s work then moved on to the full range of calligraphic work. Today the two Bens both work at the Calligraphy Studio on Lee Road, one of the last of its kind, where they hand-letter testimonials and tributes for companies and professional associations, and occasionally wedding invitations.

Despite the wide accessibility of desktop publishing, there is still a market for the work they create with skilled hands using steel-nibbed dip pens, paint brushes and gouache. De Rubertis appreciates that he doesn’t have to wear a suit and can work flexible hours, and especially that “It’s been a blessing working with my dad all these years.”

De Rubertis has volunteered as a historical interpreter for the Metroparks at Hinckley Lake since 1993, piloting an 18-seat replica Voyager canoe as trapper Jean Pettite (complete with a faux French-Canadian accent). Trappers such as Pettite, De Rubertis explained, functioned “like semi-truck drivers delivering goods, but on the Great Lakes.”

Another world opened up to him via Knitscape, a temporary community public art project under the creative oversight of artist Carol Hummel, in residence at Heights Arts Gallery in 2009. The project, which encased trees and parking meters in colorful crocheted sheathes, demonstrated that art can visually enhance a streetscape as well as create a community around an art project. De Rubertis was particularly struck by how appreciative residents in low-income neighborhoods were. One woman tearfully told him, “Nobody ever brings anything to our community, and you’re doing it for free.”

Working with Hummel on community public art projects eventually led him to the Raghurajpur International Art/Craft Exchange, where artists from throughout the world exchange ideas and skills with the traditional craftspeople of Orissa, India. Although De Rubertis says “I just make letters,” he found that in the village of Raghurajpur calligraphy was a spectator sport that intrigued the residents. This village of 400 is a nationally designated Heritage Art Village known for stone carvings, cow dung animals, palm leaf carvings, and detailed paintings done on paper made from recycled cotton and silk saris. The arts are passed down from generation to generation, and created on reed mats in the open air or in living spaces.

De Rubertis has visited the village for three years and intends to return this fall. The first year, he conceptualized a collective project based on patra chitra, a paper made from cotton saris. He created the traditional intricate decorative border with ritualized imagery and in the center he wrote Tume Bahat Sundara, meaning "you are beautiful." Armed with half a coconut filled with mud, he invited villagers to contribute a thumbprint. The following year he created his own patra chitra, visiting the sari collector and taking a day and a half to make the 2-by-4-foot paper himself. He invited artists to paint portions of the intricate border, but asked them to deviate from ritualized imagery with nontraditional ideas. Using pigments ground from stone, tree bark and berries, artists young and old asked for God’s blessing before painting. Then, going door-to-door, De Rubertis collected thumbprints in seven colors from villagers who brought babies to the door or woke up a napping grandmother to participate. This collective piece (pictured) is in Ireland in a Raghurajpur exhibition that has sold all 70 pieces on display.

De Rubertis' latest collective project was the creation of a bamboo raft. He strung 1 1/2-inch-square paintings by 450 people to the raft and launched it down the river. Unfortunately the river was low, the raft got stuck on a mud flat, and then later disappeared, stripped by villagers who scavenged all useful materials. Nonetheless, De Rubertis felt that the raft “metaphorically made it down the river.” He values the collective process of its creation, and the appropriateness of it being recycled.

The arts are an economic generator for the village of Raghurajpur. The villagers view the international visiting artists as consumers and transmitters of their local art to the world. By going back year after year and working with them as collaborators, De Rubertis has become not just a visiting artist, but a seasonal resident artist with deep relationships in the village. “We don’t speak the same language,” he said, “but we understand each other.”