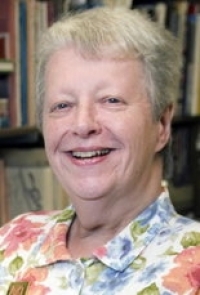 Mickie McGraw had no plans to be a pioneer. Nevertheless, not by putting one foot in front of another but by the sheer momentum of her life on wheels, she became one.

As McGraw puts it, she’s been on wheels her whole life. Growing up on the East Side of Cleveland she was a tomboy, always on a bike or roller skates. In 1953, at the age of 11, she contracted polio and has wheeled in a chair ever since.

McGraw was tutored at home through high school. Through the Society for Crippled Children, now more aptly named The Achievement Centers for Children, professional artists volunteered to come to her house. Painter Martha Horvath, enamelist and photographer John Puskas, and a ceramic artist she remembers as Mrs. Boorse nurtured McGraw’s innate talent and interest. As a result, she embarked on an arts-centered life and enrolled in the five-year Bachelor of Fine Arts program at the Cleveland Institute of Art, where strong young men would lift McGraw and her wheelchair into the building.

McGraw majored in graphic arts, a practical application of her talents intended as an entryway to the workforce. However, a serendipitous meeting with psychiatrist George Streeter on the very last day of a graphic arts internship at Highland View Hospital opened the door to a pioneering field: art therapy. Streeter was talking to anyone who would listen about opening an art studio at the hospital. He had spent two years confined to a bed after contracting tuberculosis, and as a lifelong painter he knew that the arts provided a life-affirming activity to those physically confined.

After graduation in 1966, McGraw realized that she was neither physically nor psychologically suited to the competitive graphic arts field. Remembering her conversation with Streeter, she contacted him the following year. Together they created what is now the oldest medical art therapy program in the country by establishing The Art Therapy Studio (ATS) at Highland View Hospital, a rehab hospital for those in long-term care.

Initially McGraw did not consider herself an art therapist. Indeed, at the time, there were few art therapy programs, and she simply thought of herself as an artist teacher. However, as McGraw began to adapt media and tools for disabled patients, witnessed art as a transformative and healing process, and found herself addressing patients’ emotional and psychological issues as she worked with them, her awareness that the art studio provided a therapeutic setting began to grow.

Subsequently McGraw earned a master's degree in counseling at John Carroll University to round out her approach in working with patients. She served as an advisor to help build Ursuline College’s art therapy program in 1973, as well as Northeast Ohio art therapy programs, and mentored countless students through the years.

McGraw has had the pleasure of watching ATS grow for almost 47 years. Services now include open studio programs for patients and their families, as well as those targeted to individual patients’ physical or psychological needs. The initial art studio housed at Highland View was an unprecedented collaboration between a county hospital and a nonprofit art studio. Highland View eventually was absorbed into the MetroHealth system, and ATS established a facility at Fairhill Center in 1987. At the request of patients, ATS developed outpatient programs when hospital stays became shorter. Today ATS provides services at its Fairhill campus, Ursuline College, MetroHealth Medical Center, River’s Edge, the VA Medical Center, University Hospitals and The Cleveland Clinic.

McGraw, who “retired” in 2000, serves on the advisory board and the fundraising and program committees at ATS, teaches at Ursuline College and consults with the Cleveland Clinic Arts & Medicine art therapy program. On Fridays, this 2010 Cleveland Arts Prize winner can be found in ATS’s “Discover the Artist Within You” classes at Ursuline, taking collage in the morning and painting in the afternoon, continuing to discover herself and others through making art.