JCU's Christopher Sheil is a scientist of many talents 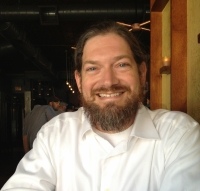 a) musician
b) artist
c) biker
d) herpetologist
e) all of the above?

Christopher Sheil is all of those things: a mandolin-playing, bicycling herpetologist who is also a scientific illustrator and painter. Which came first, the turtle or the egg? Sheil’s family background holds some of the clues.

Sheil’s American father met his German mother while stationed in Germany with the U.S. Air Force. When the couple moved to the United States, Sheil’s father learned that he would needed to further his college studies to work at the Pentagon. He moved to rural Missouri to attend Northwest Missouri State University and never looked back, earning a bachelor’s degree in geology and a master’s in American history.

Living on the edge of a small rural town, the Sheil children—six boys and two girls—were outdoors every weekend, hunting for fossils with their father. At home, their mother instilled in them an appreciation for the arts, which included music lessons. As adults, the Sheil siblings are professional musicians, artists, a chef and—Christopher, sibling number seven—a mandolin-playing, bicycling artist who is a professor in the biology department at John Carroll University (JCU).

Sheil’s interest in music began in fourth grade with the trumpet. He played French horn in his high school marching band. In the 1980s, he listened primarily to punk music (Black Flag, Bad Religion and the Ramones) and early hip-hop from groups such as the Beastie Boys. After high school, Sheil did not pick up an instrument again until 2003, when he moved to Cleveland to join the JCU faculty.

Mentored by biology colleague and guitarist Carl Anthony, Sheil took up the mandolin, and a band evolved that includes Anthony’s wife, biologist Cari Hickerson-Anthony, and Sheil’s wife, Julie. The band, Heelsplitter—named after an endangered freshwater mussel—plays all-original roots music, strongly influenced by punk, rock, and a little bit of country. Interestingly, four of the ten JCU biology faculty members are musicians—although it is not a criterion for hiring in the department.

As a visual artist in high school, Sheil created comics and doodles influenced by Stephen King’s Creepshow comic and MAD magazine, which he continues to read today.

At the University of Kansas (KU), where he earned his B.S. and Ph.D., a scientific illustrator saw Sheil doodling one day and said, “Come with me.” She gave him a box of Rapidograph pens and inks, and he subsequently illustrated not only his own research papers and his tattoo, but also was hired as an illustrator for the Natural History Museum at KU. Today, Sheil teaches a summer course in scientific illustration at JCU, and has begun to explore the medium of watercolor to capture atmosphere and light in landscape paintings.

As an undergraduate, Sheil dropped out of KU for two years to establish residency for reduced tuition. During that time he volunteered at a wildlife rehab center, washed dishes, and worked in a pet store and bike shop. “That’s where I got my passion for cycling, fixing bikes, and keeping bikes on the road. Over the years I’ve fixed and given away an unknown number of bikes . . . it’s been a lot of bikes.” In recent years, Sheil launched a bike-sharing initiative with JCU’s Environmental Issues Group.

Sheil’s Ph.D. in systemics and ecology—earned under the wing of herpetologists at KU—defines his deep involvement in field biology. Summer jobs in the Gulf of Mexico, from Louisiana to Florida, included trapping snakes, frogs, gators and turtles. Sheil’s research focuses on the skeletal development of turtles in an evolutionary context, and his direct observations of specimens connect to evolutionary trees generated by molecular biologists.

Sheil lives with a half-dozen dogs and cats and his wife, singer/guitarist, veterinarian and certified animal acupuncturist Julie. But, she is another story . . .