Eric Coble: a playwright's journey from Dobama to Broadway 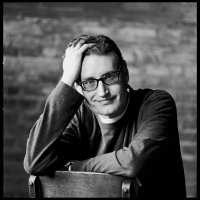 What do Clint Eastwood, Sonny Bono and Eric Coble have in common? All are professional artists elected to public office. Playwright Coble’s presence on the Cleveland Heights-University Heights Board of Education, and painter Jeffrey Coryell’s recent election to Cleveland Heights City Council, give our city more artists as elected officials than almost anywhere else in the country. Coble, in the middle of his second four-year term, has promised not to write a play about the school board while he is a member. “Self-preservation,” he claimed.

Coble began storytelling as a small child in New Mexico, when he would dictate stories blending Alice in Wonderland and Captain Kangaroo to his mother, who would write them down for him to illustrate. In Colorado, he turned to acting in his high school theater program and then, as a college English major, performed in both college and professional community theater, racking up 12 shows a year for many years, ranging from Shakespeare to Sam Shepard.

A playwriting class in grad school at Ohio University (OU) began to shift Coble’s interest from acting to writing. While at OU, he met his future wife, Carol Laursen, a fellow acting major, and found his future home through an internship at the Cleveland Playhouse.

After grad school, Coble and Laursen settled in Cleveland Heights and started a family. Laursen began to work at University Hospitals as a lab technician, and Coble drifted into playwriting rather than acting, because he could write in the playpen while watching the kids. Apparently this was a successful strategy for their family, as today their son Trevor is a freshman at Macalester College, daughter Miranda is a junior at Heights High, Laursen is returning to acting and writing, and Coble is about to launch a play on Broadway.

Coble credits Dobama Theatre, founded on Coventry Road in 1959 and now located on Lee Road, with giving him “chance after chance.” His first full production, “Sound-Biting,” was a political comedy launched at Dobama in 1996. In fulfilling its mission to nurture the development of area theater artists, Dobama has produced five Coble plays and must be so proud that one will be opening on Broadway this spring.

The play, “The Velocity of Autumn,” starring Estelle Parsons and Stephen Spinella, is the last in a trilogy about a smart, passionate, independent visual artist at three stages of life.

The trilogy began with “A Girl’s Guide to Coffee,” a play for six actors, which presented an independent 20-something who made no plans and felt that nothing was permanent. “Stranded on Earth,” a one-woman show, brought us the middle-aged married woman, after she had put down roots, t a time in her life when she lived through her best moments and worst nightmares. In the two-person play now headed for Broadway, the woman is in her 80s and in failing health. Ironically, she now knows who and what she is, and resists being pulled from her roots to enter assisted living. She has barricaded herself in her home with Molotov cocktails when her youngest son, whom she hasn’t seen in 20 years, climbs a tree to enter the house and intervene.

In spite of having a play on Broadway, Coble said, “Cleveland is not a stepping stone. It is home. There is something really meaningful about having an audience that knows me for myself, greets me in the grocery store and has experienced my work over the years.”

"The Velocity of Autumn" previews begin April 1, prior to an April 21 opening at Broadway's Booth Theater. Tickets are available at Telecharge.com.

Peggy Spaeth is the former director of Heights Arts.