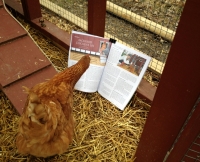 Eighteen families in Cleveland Heights have new additions to their households—hens.

Matt Wilson, who lives near the Lee Road Library, got his coop in June 2012 and owns four hens. He said that having a chicken coop has helped him meet a lot of his neighbors. "Some of them bring friends from outside the neighborhood to see our chickens," said Wilson, adding, "My son's like a celebrity at school, as the kid who owns chickens."

Cleveland is the only other city in Cuyahoga County that permits chickens. Cleveland Heights City Council approved the keeping of chickens for eggs in May 2012 as part of the city’s Sustainable Zoning Amendments. Chickens are conditionally permitted by the new code. The process of amending the city’s zoning code took almost two years and included reviewing the existing zoning code, hiring consultants, holding public and stakeholder meetings, writing documents, and reviewing zoning codes from other parts of the country.

The Heights chickens stay in "a variety of coops,” said Knittel, depending on the owner and the yard. According to Knittel, many applicants choose locations in their yards where chickens will be safest from predators, and cover both the coop and chicken run with chicken wire. Most chicken runs are attached to the coop, said Knittel, who noted that the conditional use "requires the applicant ensure the health and well-being of the chicken so that it is not endangered."

City code allows a maximum of four hens (no roosters) to be owned by each family. In addition to the 18 households that currently own chicken coops, six additional families have applied, and they will be on the planning commission’s June agenda.

Knittel says that she has discussed the project with many people, in and outside of Cleveland Heights, who are "excited and interested in keeping hens for the purpose of fresh eggs."

Wilson’s family has always been interested in the environment, and built a vegetable garden shortly after moving into their house.

"The chickens are a great source of entertainment," Wilson said. "Now that the weather's nice, sometimes we go in the backyard and watch them." His 18-month-old daughter is particularly fascinated by the chickens. “Sometimes she tries to talk with them," he said.

Despite the growing popularity of chicken keeping in the Heights, no east-side stores sell supplies for chickens. Wilson said his chickens primarily eat feed that he buys from a home and garden store on West 55th Street, though sometimes the chickens also eat bread, fruit and weeds from the garden.

The application is available on the city's website at www.clevelandheights.com.