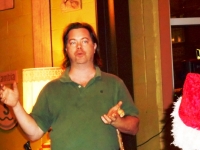 If you happen to go past Phoenix Coffee on Coventry on a Monday night, chances are the place will be packed with people listening to great music emanating from the shop. The reason? Monday night is open-mic night at Phoenix. Musicians and singers can come into the coffee shop to perform up to three songs for the gathered crowd. The same event takes place on Wednesday nights at the Phoenix Coffee on Lee Road.

Cleveland singer-songwriter Charlie Mosbrook, honored as the city’s best singer-songwriter in 2011 by Scene Magazine, organizes these great musical evenings. Son of Joe Mosbrook, a former reporter on Channel 5 in Cleveland and author of a book about the history of jazz in Cleveland, Charlie is a Cleveland Heights native who grew up on Coleridge Road and attended Fairfax Elementary, Roxboro, and Heights High.

[On Feb. 12 at 8 p.m., Mosbrook will celebrate the release of his newest CD, "Something to Believe," with a show and party at the Barking Spider Tavern, 11310 Juniper Road, University Circle. "Something to Believe" is a collection of new songs in traditional American folk styles, and on it Mosbrook is joined by other musicians from the region. For more information, visit www.charliemosbrook.com.]

Mosbrook's interest in music began in the 1980s, when he was 16 years old. He started singing and playing bass and eventually moved on to guitar. In 1987, he began playing at Tommy’s restaurant on Coventry. He remembers the first night: “Harvey Pekar was sitting there, and he was just glaring at me,” Mosbrook said.

Two years later, he started doing open-mic nights at the Arabica Coffee House, located where the Phoenix Coffee now stands. “It became a good vehicle for launching groups,” Mosbrook said. “We would have about 500 people there some nights. To me, the open-mic events sort of give everything meaning. You watch people come, and they sort of find their feet. You watch their progress. You see someone who at first has no visible, audible talent, and then you see it all come together.”

One of the groups that emerged from Mosbrook’s Arabica open-mic events was Odd Girl Out, which featured Anne E. DeChant. DeChant has gone on to a career with some national success as a singer, songwriter and guitarist. While hosting the open-mic nights, Mosbrook has been pursuing his own professional solo career, which began in 1988 at the old Bank Street Café downtown.

At one point, he took a break from performing to study recording technology at Lakeland Community College. Around 2004, however, Mosbrook was becoming frustrated with his music career. “It was a period when I just burned out,” he said. “It was getting harder and harder to find places where you could play and get paid. The coffee houses and book stores just wanted musicians to play for free.”

In an effort to quit smoking, Mosbrook started running. Working up to 20—30 miles a week, he decided to train for Ironman triathlons. In 2007, he competed in his first Ironman competition, which consists of a consecutive 2.4-mile swim, 112-mile bike race and a 26.2-mile run.  He successfully competed in another triathlon, but in 2009, he injured his spinal cord. He underwent surgery at the Cleveland Clinic, and physical therapy at MetroHealth Medical Center.

As a result of the injury, Mosbrook, who still has to walk with a cane, turned his focus back to his music. The first song he wrote was appropriately called, “Back on My Feet Again.”  He has since written more than 20 songs about his recovery. In 2011, he released a CD called "Little by Little." As the liner notes state, the music on the album “celebrates Charlie Mosbrook’s unwavering determination to overcome adversity.” That same year, he released another CD, "Coverage: The Songs of Charlie Mosbrook." On that album, local artists cover some of Mosbrook’s best-known songs.

In addition to focusing on the release of his new CD, Mosbrook hosts programs about Woody Guthrie at libraries throughout the region, and on the first Monday of every month, he offers a song-writing workshop at the Coventry Village Library, though it’s still the open-mic nights that he enjoys the most.

If you stop by the one at the Phoenix on Coventry, you’ll see a wide range of musicians, from folks in their 60s and 70s to college students, and, on one recent night, a girl who was just 12 years old.  If you haven’t been to one of these events, you should be sure to check it out.

James Henke lives in Cleveland Heights. He is a former editor and writer for Rolling Stone, and has written several books, including biographies of John Lennon, Bob Marley and Jim Morrison.