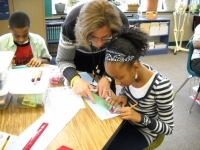 Making sense of the world around them can be tough for kids, but a recent exercise in science class helped fifth graders at Canterbury understand the scale of the universe.

Using an inquiry-based approach, fifth-grade science teacher Janice Kurtz elicited information that the students had learned in an introductory lesson. Students eagerly offered facts: The planets orbit the sun. The inner planets are closer to the sun. The asteroid belt is located between the inner and outer planets. The outer planets are much farther from the sun. Then Mrs. Kurtz asked the students to look at a beautiful, glossy poster of the solar system and tell her what was wrong with it. She helped the students articulate that the poster did not accurately depict the distances between planets and the sun.

The inexactness of the poster offered an opportunity to learn. Ms. Kurtz clearly stated the learning intention for the class: “We are going to make a diagram that shows the proportional distance between the planets.” Through a series of questions, she helped them to create accurate representations of the solar system on long narrow sheets of paper.  With their rulers and a chart filled with information about planets, students drew a large sun at the left hand edge of their papers, and then began to measure and mark them. As they carefully drew the location of Mercury, Venus, Earth, and Mars, students noticed how close these planets were to one another—a mere centimeter separated the four inner planets. Drawing the furthest outer planet a full 30 centimeters from the sun helped the students understand the enormity of our solar system.