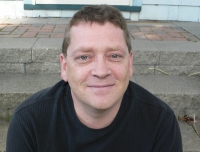 I am in awe of Dan Chaon’s best-selling novel Await Your Reply—the complexity of the plot, his mastery of suspense, and a darkness he dwells in that speaks to modern life. For me, the book is larger than life.

Yet, across the table at Phoenix on Lee, having a cup of coffee and sharing a cookie, he is warm and smiling, an easy-to-talk-to, for-real kind of guy, with blue eyes and a boyish face. He laughs a lot and insists he’s a "pretty optimistic, upbeat person."

Chaon (pronounced Shawn) and his wife, Sheila Schwartz - also a writer and once his professor - moved here in 1990, when she got a teaching job at Cleveland State University. The next year they moved to their home on Meadowbrook. He patched together a living doing odd jobs, and in 1996 published his first novel, You Remind Me of Me. Oberlin College hired him in 1998 to teach creative writing. "I love Oberlin," said Chaon, now 46. "I love teaching there, and I have great students."

Their two sons, who attended the Cleveland Heights schools, are now in college. Sheila died in 2008 after years of abiding with ovarian cancer. "I stayed in the Heights," Chaon said. "My kids were in school and I don’t mind the commute. Now the boys are gone and Sheila is gone. I feel comfortable where I am. I love my house and my neighborhood."

How did you get the idea [for the book]? Where did you begin? I wanted to know.

"I started with three scenes or images," Chaon said. "A motel on a dried-up lake in Nebraska, the Arctic, and a father and son driving to a hospital with the son’s severed hand." These three disconnected scenes open the book and flow into three stories, which then intertwine.

"I knew they were connected—by mood," he said. "I wanted the iconography of a thriller, of suspense and horror." He likens the mood to film noir with "the slipperiness of people who have all kinds of secrets, and no one tells the truth. Not until the middle did I get into identity theft."

Identity theft is just one assault on identity. Chaon covers a spectrum from mental illness to how flimsily many people are put together, especially young people who seem to slip with ease into new identities.

Chaon says his acute awareness of identity, its blank spaces and pieces that don’t fit, may come from having been adopted, with all its attendant secrets. At 30, with the help of the Adoption Network of Cleveland, he searched for his birth parents. He came to know his birth father, Huck. "We look alike and many of our gestures are the same."

Now with both sons away, his 25-year-old half-brother, Huck’s son, has moved in with him and is going to school at Tri-C.

I came to know of Chaon when I read the book Long Way Gone, by Ishmael Beah, the story of being forced to become a boy soldier in Sierra Leone. Beah was a student at Oberlin and Chaon was his creative writing teacher and mentor. This fall the two men will be featured at a convocation on the college’s long-standing tradition of mentoring.

Chaon considers narrative a way of thinking, just as analytic and scientific are ways of thinking. "It is a complicated thought process, why people do what they do, what happens next. You use intuition, and you must develop empathy. It is a complicated set of skills, but it’s a discipline that can be taught.

"I started writing stories when I was eight or nine and sent them off to magazines. The editor of Tri-Quarterly actually wrote back to me—'You are not ready, but this is good stuff.’ I was going to be an actor, writer and director."

He may be on his way. A new Dan Chaon attraction may appear at the Cedar Lee one day. His first novel, You Remind Me of Me, is being made into a movie.