A woman of Coventry 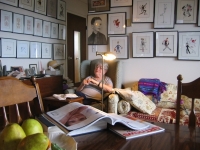 She has lived in the Coventry neighborhood for 32 years, since she arrived from what was then the Soviet Union. She is a friend of Tommy Fello, of Tommy’s, whom she calls the "unofficial mayor of Coventry," and has had her art exhibited at his restaurant. When she goes into Hunan Coventry, waiters greet her warmly and the chef makes a special dish for her, something that is not on the menu. Coventry is her stomping ground.

Eugenia Vainberg, 82, was in the early wave of Jewish immigrants from the Soviet Union. While others achieved success and moved to the outer suburbs, Eugenia also succeeded, but chose to stay. The atmosphere of Coventry suits her.

She lives in Musicians’ Towers, a 13-story, and to my eye, Soviet-style, building from the 1970s towering over the older, smaller apartments on Lancashire. She is on the top floor, the penthouse as she says, with a spectacular view of the city that extends to the lake. The building’s residents are mostly elderly Russians and African Americans. Flyers for concerts or flu shots are printed in Russian and English. Eugenia organizes musical events each month, and in her circle, anyone with extra food divvies it up and shares. "We will never get over our hunger," she once told me.

Eugenia is from Kiev, in the Ukraine, from where my grandparents also emigrated. My family never looked back at what they thought of as a fearsome place. It left me with a Russia-hunger. I wanted to know, and I came to know through my friend Eugenia Vainberg.

The hunger of Eugenia’s generation stems from the deprivation and hardship of Stalin’s purges and World War II. In 1938, two of her uncles were arrested and killed in Moscow’s infamous Lubyanka Prison. Eugenia’s beloved father, a prominent engineer and scientist, was arrested and tortured.

When the Germans bombed Kiev in 1941, Eugenia’s father put her, her mother and sister on a train to the east. An aunt and three cousins did not leave. When the Germans arrived, the remaining family members tried to flee on foot. The custodian of their apartment building shot them. It was a fearsome time.

Eugenia embroiders and covers many subjects in her work. The one I am most drawn to is the confluence of Russian and Jewish artists in the early 20th century. She is a chronicler of history, a history she was never taught when she lived there. Her embroideries of this period, taken together, tell the story of artists—Jewish and Russian—flourishing at a time of hope and creativity, before Stalin cracked down.

Her hundreds of embroideries render the works of such artists as Marc Chagall and Vassily Kandinsky. She focuses on Soviet and French avant garde artists such as Vladimir Lebedev and Fernand Leger.

She has done portraits of others, less familiar to Americans, such as writer Ilya Ehrenburg and actor Solomon Mikhoels. The works come alive in her brightly colored precision stitching. "I would never have done this if I had not come here," she told me.

Eugenia was trained as an engineer and worked for a company here for many years. She attended Senior Scholars at Case Western Reserve University for 17 years.

You may see Eugenia Vainberg under her sun hat, on a beautiful day, near the lake at the Nature Center doing her embroidery. But the picture of her that I will always hold dear is Eugenia in a comfortable chair embroidering. A small table in front of her, with her thread and phone, Eugenia stitches the art of her country of birth, and of her people, at one extraordinary time, so that many others may know this history.