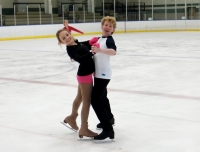 I know it’s not a good idea to laugh at your children. But the first time my husband and I took our then five-year-old son skating, his feet were flying out from under him in so many different directions, and at such a clip, that we—holding his hands on either side—could not stop laughing.

When we stopped to rest, we asked him how he was doing and he looked up at us with a euphoric expression. "Great!!" he said. He was having the best time. Such is the lure of the ice.

I was reminded of that day while watching the free skate at the Cleveland Heights Recreation Department’s ice rink. The little ones push tentatively forward on wobbly ankles, their arms flailing for balance in jerky motions. All of a sudden a little guy’s feet are up and he slides on his tush, laughing. I think of skating with another young son. Falling was another exploration: touching the ice, even tasting it.

Some hold onto walkers that slide across the ice. A girl walks hand-over-hand along the wall. They are so earnest. Most are not that far from learning to walk. Now walking is to become gliding. It takes a leap of faith.

A number of Orthodox Jewish families are here—girls in long flared skirts, boys in yarmulkes. Adults zoom by, keeping an eye on their kids or just enjoying their own smooth motion. In the other rink, a class is in progress. Lines of children skate across to the teacher or follow her in a large circle or serpentine, like rows of ducks.

This is an incredibly busy place. On this Sunday, 15 different sessions take place, punctuated in between by the Zamboni, scraping and smoothing the ice. Ice rink manager, Kelly Taylor, said that before the second rink opened in 2001, hockey practices were scheduled as early as 4:30 a.m.; the last one finished at 1:30 a.m.

The rink also offers women’s hockey, coed hockey, speed skating, adult skate with an organist and lessons for special education students. Then there are the leagues: five for children, beginning at five years old. The rink is home to three high school varsity hockey teams—Cleveland Heights, Brush and Benedictine, as well as Case Western Reserve University and an adult league.

I catch the end of the Benedictine hockey tournament. These are big guys, bulked up by their padding, expert skaters with an aggressive edge, who can turn on a dime. The clanging of sticks fills the air. Centerville, Dayton, wins over North Olmsted. At the end, the loyal parents and grandparents stream out, carrying blankets, seat pads and coffee cups.

In the morning, I felt I had a front row seat at the Olympics. Dance teams from the Pavilion Skating Club were having their last practice before heading off to the Junior Nationals in Salt Lake City.

Such breathtaking skill and beauty, poise and discipline. It is hard to believe that Kimberly Berkovich, of South Euclid, and Micah Jaffe, of Cleveland Heights, are both only 14 years old.

Alex Schachtel, of Shaker Heights, is 16 and Jessica Manahan, of Lyndhurst, is 14. As Alex and Jessica skate, their bodies have such power and grace as they bend to each other in perfect synchronicity.  Daniel Klaber, 16, who attends Brush, will skate in the freestyle solo at Junior Nationals.

I remember skating outdoors at another public rink, gliding along to the music, the sun going down, our bodies stoking heat against the creeping cold. The lure of the ice.

On one Sunday morning, it is possible to see men and women, boys and girls, novice and expert, parochial and public, those out for fun, those out to learn, and those out to win. This is what a community can do.

Eleanor Mallet's column, "A Heights Observer," explores the nooks and crannies in the Heights. She can be reached at eleanormallet@yahoo.com.