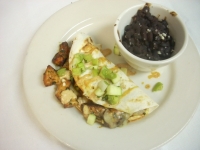 In late 1979, when Lopez first opened in Cleveland Heights, owner Craig Sumers said residents had far fewer dining options. Thirty years later, Sumers said Heights residents have “a lot more alternatives within 15 minutes,” including popular dining spots on Coventry, Lee and Shaker Square. Yet, Lopez continues to seduce our palates with fresh menu choices and one of the best patios around. Even the Food Network was smitten with Lopez’s southwestern menu during a late September visit to film for its “The Best Thing I Ever Ate” series.

To mark Lopez’s milestone year, Sumers created monthly promotions, including a text message campaign that alerts diners of new menu choices every Friday and offers up dining discounts like $20 off food purchases. (Text “LOPEZ” to 95495 to sign up).

The effervescent Sumers exudes heartfelt affection for the city that has hosted him for 30 years, and ends each text message and e-mail to customers with the signoff “Love, Craig.”

“I still feel the same enthusiasm for the business and our customers,” he said. “What began as a vision, is now a tradition.”

Sumers said the new campaign has been a success since more than 1,300 people have signed up for the free texting service. He also said Friday nights have been busy with diners lured by the menu options referenced in the weekly texts. Promotions will continue through at least December.

The Lopez menu has “seriously changed” over the past 12 weeks. One to two new items are swapped into the menu each week, which have been a mix of completely new dishes like the pulled pork lettuce wrap ($7.50) and reinventions of old favorites like the tamale ($7.50), the short rib pot pie ($8.50), and brunch for dinner, a southwestern crab cake "Benedict" ($18.50).

The format of the menu also has been revamped to present repeat diners with selections in a fresh way with the hope they will try something new. According to Sumers, “people don’t read a menu” since they are creatures of habit and often order the same selections.

I am guilty as charged since I’m usually tempted to order one of my Lopez staples like the savory mushroom goat cheese quesadilla ($14) and lobster enchiladas ($19.50). However, I have not regretted sampling new items like the blackened mahi quesadilla ($17).

Sumers stressed how much he values customer feedback via comment cards circulated by servers post-meal and the comment section of the Web site. Customers can win $100 for submitting suggestions. Sumers said he spends several hours a week exchanging e-mails with customers who have offered helpful feedback.

“I wouldn’t be sitting here for 30 years in anywhere but Cleveland Heights,” Sumers said.

Craig, we love you, too.