Lessons from Woodie the Wise (aka my dog): Anger 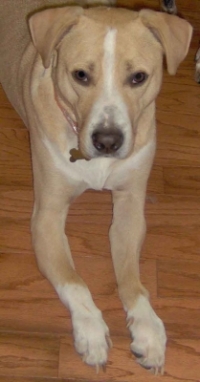 Humans often let their thoughts and emotions run them around in circles (and they think I’m silly because I chase my tail—at least I can catch it). I lie there quietly and watch while they turn around and about, especially when they are angry. One thing sets them off—a conversation, a misunderstanding, an event having to do with this “money” concept—and there they go, spinning… Often they’ll move quickly and are inexplicably surprised when they trip or knock things over.  They speak in harsh tones and don’t understand why they get barked at in return (come on people, this is, like, Animal Communication 101). Sometimes they even throw things—plates, keys, baby wipes—whatever’s handy—as if it will stop the spinning. Then they get mad they have to clean it up. Hey, at least it isn’t my “mess” (I usually keep that little comment to myself, but I should think it would be an obvious insight).

My point is: People, you need to stop spinning. You cannot catch your minds or your hearts—they are inside of you, like the itch on your back you can’t scratch. Throwing things will not help. Yelling will only yield more of the same from your pack members. The best way to stop running in circles is to realize that anger is a compulsion—not a means to an end. Often it is a conditioned response, so identify your triggers and change your behavior. Just ask Pavlov—the bell does not make you salivate, only your expectation does. If you feel you might snap, chew on a bone—they’re great tension relievers. Roll on your back if you have to—I’ve found there’s always a good tummy scratch in it somewhere. Just stop wasting so much time being angry and make amends. And for those of you who choose to harbor anger, I have just one thing to say: Get a tail. Life’s too short.

Mary Carroll Courtwright teaches at Bryant & Stratton College. Her novel "Song of the Messenger," set in Cleveland Heights, was published in 2007 and her writing has been featured on National Public Radio. Learn more at www.marycourtwright.com.