An interview with Laura Taxel, epicure of Cleveland's ethnic eats 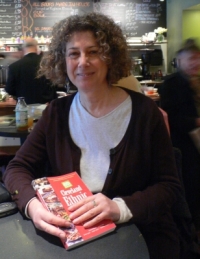 With the release of the eighth edition of Cleveland Ethnic Eats this spring, I sat down with Cleveland Heights food writer Laura Taxel to talk about her latest book.

How has Cleveland Ethnic Eats evolved over eight editions? It has been a fascinating journey. When I first wrote Cleveland Ethnic Eats, the subject was considered quaint. Fifteen years later, public interest in ethnic food has exploded.  People are enthusiastic about trying new and exotic things. My neighborhood grocery has a sushi bar!

A special feature of the eighth edition is a Web site and blog. Readers can share their recommendations of ethnic restaurants or markets. If you are the first person to suggest one that I include in the next edition, you will receive a free copy when it is published. My Web site also includes free updates. (www.ClevelandEthnicEats.com)

Who is your audience? Anybody who enjoys food – retirees, college kids, vegetarians all like my book. It is a common gift for newcomers because it says, “Look at our fabulous community.” The book can be a vehicle for exploring new areas of the city. Travel sites like eGullet.org and chowhound.com recommend my book for visitors to Cleveland. Some readers use it as a social tool. People have formed eating clubs around it.

Why do you connect ethnic food with healthful eating? Traditionally made food does not rely on salt, sugar and chemical additives to stand in for flavor. When you cook with quality ingredients and make everything from scratch, food is healthier and more satisfying. You don’t need to eat so much of it.

What are your thoughts on the slow food movement and community supported agriculture? These movements have a hugely important mission to focus attention on what we eat and where it comes from. I am an advocate of eating locally grown and produced food because it is better, contributes to the economic viability of the area and is a model that can work over the long term. I quibble with purists who say ethnic restaurants do not always use local ingredients. Ethnic restaurants prepare authentic dishes from scratch right here in Cleveland. They are local producers.

How will ethnic restaurants and markets survive in a depressed economy? I first learned about ethnic eats because we were poor and needed cheap places to eat. Many of the places were small and offered warm, personal experiences. The owners do all of the labor.  Most of the restaurants featured in my book are reasonably priced. Ethnic markets offer the best values, especially Asian markets. We will continue to gravitate to them, even in a tough economy.

What makes Cleveland Heights a special place for you? I adore Cleveland Heights. I would never live anyplace else. It offers the perfect combination of urban amenities, arts, culture, food and beautiful affordable homes. On a Saturday night, I walk from my Coventry home to the Cedar Lee for a movie and later go out for a meal or drink. Look at all the ethnic restaurants on Lee Road – Turkish, Italian, Thai, Japanese and Mexican. As far as dining goes, both ethnic and non-ethnic, you could go to a different restaurant in Cleveland Heights every night for a month and still eat well.

Jessica Schreiber is a community volunteer.