Ariyoshi serves up a taste of authentic Japanese eats 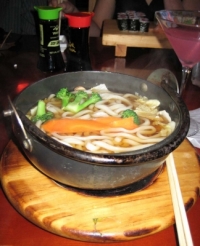 In April, I had the good fortune of visiting Japan during hanami season when the lovely cherry blossoms bloomed. Since I returned, I’ve been holding on to those memories ever so tightly, including the wonderful “experience” meals like shabu-shabu and yakitori sampled in cozy restaurants. (Shabu-shabu is like a Japanese version of fondue, but features a large pot of boiling water for cooking thin slices of meats, veggies and udon noodles. Yakitori consists of barbecued skewered meats and veggies on bamboo sticks.)

I was ecstatic when I heard that Ariyoshi on Lee Road offered shabu-shabu and set up a date with my Japan traveling companion and our significant others.

My first visit to Ariyoshi was last summer. I enjoyed my meal, but I delayed returning because I felt the atmosphere was lacking. With the exception of the sushi bar, the interior resembles a dining hall and certainly could benefit from a layout that makes dining feel more intimate.

I must have postponed my second visit too many times because Ariyoshi recently updated its menu to feature fusion fare and, unfortunately, shabu-shabu didn’t make the cut.

After our server shared the news, we consoled ourselves with Kirin beer and fruity drinks like Zombie, which is billed as the world’s most lethal cocktail, while we reevaluated our menu options. The service staff was very attentive and must have sensed my initial disappointment because the hostess brought over an extra drink on the house.

Our party enjoyed the selection of appetizers and small plates. Yaki gyoza, pan-fried dumplings, were crispy and tender in all the right places ($4.50). Determined to get our hands on some thin beef to somewhat reincarnate a shabu-shabu experience, we tried the tasty beef tataki, which was prepared seared with a tangy sauce ($6.95).

Unfortunately, the kushiyaki dish that featured beef, chicken, shrimp, scallop and scallion on a skewer, didn’t live up to the yakitori we sampled in Japan ($16.95). However, the sushi selection was vast, fresh and reasonably priced.

Ariyoshi offers free parking in the back of the restaurant, which is a definite perk for busy Lee Road. I initially parked in a metered space nearby and a staff person offered to move my car to a free spot when I asked for change to feed the meter.

I may have missed out on shabu-shabu, but the staff’s hospitality helped to fill the void.

Per her grandmother, Christina Klenotic is a “good eater” who never met a carb she didn’t like. Read about her Japan trip on www.christinaspostcards.blogspot.com.