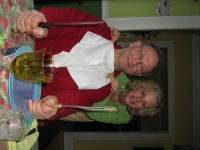 Lucinda Stevens’ culinary challenge is her husband Carl Goldstein, a vegetarian. Former high school sweethearts back in Flint, Michigan, Carl and Lucinda reconnected in Ann Arbor 20 years ago, married and moved to Cleveland Heights a year-and-a-half ago. “When I first visited Cleveland Heights, I immediately fell in love with the urban character, friendly people, small businesses, landscaping and cultural offerings. Ann Arbor was getting too pretentious,” says Stevens.

“I have a counterculture background, so it was easy for me to address Carl’s vegetarian needs and win his heart. I cut my teeth on Adele Davis' Diet for a Small Planet, Laurel’s Kitchen, Moosewood Cookbook and The New York Times Natural Foods Cookbook. I just bought a copy of the new bestselling vegan cookbook Skinny Bitch in the Kitch. I would have to say the Moosewood Cookbook is still my favorite”, says Stevens.

Husband, Carl, who owns duplexes in Cleveland Heights, says, “My first wife couldn’t boil water and mashed potatoes came from a box. When I met Lucinda, she made pizza from scratch. I was blown away. But I married her for her salad dressing.”

“I really learned how to make salad when I was a waitress at a Greek restaurant in Ann Arbor,” says Stevens.

Lucinda took a nature hike in Forest Hills Park last week. The naturalist pointed out copious areas of garlic mustard, a highly invasive weed that makes a pretty good pesto sauce. Lucinda was inspired. She picked a bunch and created Garlic Mustard "Pest"-O. "Just look in your backyard -you might find a bunch for dinner," says Stevens.

1 cup garlic mustard leaves and upper stems. Use only the ragged leaves; the round ones are too bitter. (optional- half garlic mustard and half fresh basil)

Combine all ingredients in a food processor or blender and process to a coarse consistency. Do not over blend.

In a wok or large skillet, saute one bunch of asparagus cut into one-inch pieces with one small chopped onion and one cup of chopped grape or cherry tomatoes in olive oil. Saute until tender and then toss with half a pound of fine cooked spaghetti. Dress with the pesto sauce, garnish with parmesan cheese, and serve. Makes 4 servings. Serve with salad for a fine spring dinner.

Alice Stratton is a Shelburne Road resident. Culinary Heights is an occasional column on food and cooking.