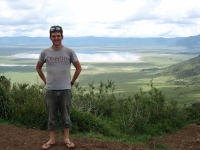 By the time he graduated from Heights High School in 2005, Mark Muthersbaugh had logged 1,000 volunteer hours at the Natural History Museum, so it didn’t surprise family or friends when he decided to study biology at Oberlin College.

Last semester, when the opportunity to study abroad in Tanzania presented itself, Mark jumped at the chance. “Tanzania protects 30% of its land in large National Parks,” explained Mark, “so I felt studying there would offer the animal behavior field study opportunities I wanted, while giving me an experience I couldn’t get any place else.”

That experience included living in a tent for three months, ten minutes away from Lake Manyara National Park, an area that stretches along the Rift Valley with a setting that Ernest Hemingway called “the loveliest I had seen in Africa.”

Forty-nine other students from all over the United States joined Mark in Tanzania. His classroom instruction included wild life management, wild life ecology, environmental policy and sample counting techniques; information that was later used when Mark went out into the National Park to determine how various animal populations were doing. Mark’s accommodations ranged from high-end safari lodging camps to simpler safari campsites. “Staying in a two person tent for three months forced me to be ultra organized,” laughed Mark.

During a longer expedition, Mark went into the Serengeti for five days. He met members of the Masi Tribe who live a predominately pastoral life style. He also spent three weeks following four baboon troops: two troops ranged freely and hunted for their food in the wild while the other two troops were foragers that gathered their food by rooting through human trash. “I was amazed at how smart and clever the baboons were,” said Mark. “At the end of the study I found that the foraging troops had a smaller range, had more free time, and were more social.”

The pictures Mark shot in Tanzania were beautiful enough to be featured in National Geographic magazine. One picture showed lions sleeping beside the van Mark was riding in. “It is so hot that lions will look for whatever shade they can find,” explained Mark. “This shade just happened to be right next to our transportation!” Another picture showed the massive elephant that had charged Mark when he got too close while snapping pictures.

This summer, Mark will work with Roger Laushman, head of the biology department at Oberlin, doing research on crayfish populations in Northern Ohio. The research, which has been going on for several years, is studying the effect of pollution on crayfish, as well as the relationship between invasive and native crayfish species in two rivers.

Mark explained the importance of the research to Northeast Ohio. “Crayfish is a keystone species that is important to the whole ecological system and can demonstrate the health of a river system.” Pollution affects crayfish and is passed on to their predators such as big mouth bass and heron.”

After college Mark would like to work on resolving wildlife problems and is considering going into the Peace Corps. He hopes to go back to Tanzania someday.

Lita Gonzalez, a long time community volunteer, lives in Cleveland Heights with her husband Mark. Both her daughters are Heights High graduates.

Read More on What are they doing now?