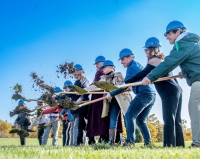 The ground is officially broken at South Taylor Place.

In an Oct. 14 ceremony, the city of University Heights and Knez Homes broke ground on the South Taylor Place townhomes.

When the project is completed, 30 new "luxury" townhomes will have been built, in clusters of three or four homes. Each will have a two-car garage, and some will feature rooftop decks with views of the Cleveland skyline.

“It began in 2018, my first year in office as mayor. This administration began the process of creating this project, creating this situation, creating the structures through which this project was not only possible, but would one day happen. That day is here.”

South Taylor Place will be the first new housing development built in University Heights since the 1970s.

Brennan said the project would not have happened without the strong and persistent work of many. The mayor gave credit to the city's Economic Development Director Susan Drucker, former Housing and Community Development Director Patrick Grogan-Myers, City Engineer Joe Ciuni, City Law Director Luke McConville, past and present city building officials, housing officials, and past and present members of UH City Council.

“This land was assembled and this project is happening because school officials and city officials came together and shared a common vision for what will be,” Brennan said.

Brennan also thanked developer Bo Knez and his team for “sharing in our vision of what will be.”

Mike Cook is the communications and civic engagement director for University Heights.