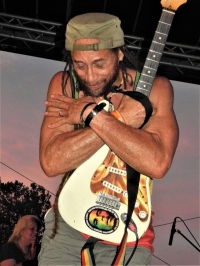 Carlos Jones and the PLUS Band will return to University Heights for Fall Fest on Sunday, Oct. 2.

Were you wondering why Carlos Jones and the PLUS Band weren’t on the University Heights Summer Concert Series schedule this year? The legendary reggae band will be performing at Fall Fest, instead.

Having grown up around fall festivals, Mayor Michael Dylan Brennan said it has always been his goal to bring such an event to University Heights. “Our first Fall Fest was in 2019, and that was a great success for an inaugural event," said the mayor. "2021 was big, and we anticipate this year’s edition will be bigger and better than ever.

“Fall Fest is just another way for us to come together as a community.”

Carlos Jones and the PLUS Band will headline with a free concert at 3:30 p.m. Fall Fest will also feature performances by singer-songwriter Diana Chittester, and the Wizbang Circus.

There will be activities for the kids, including pumpkin painting, and bouncy houses.

And come hungry. Two food trucks will be on site—Wild Spork and Dawg Bowl Food Truck—as will other food vendors. Pop Culture CLE, with artisan popsicles, will return this year, as will University Heights local favorites Odd Dog Coffee, The Yummy Cart, and Milk & Cookies.

As always, artists and vendors will be the stars of the festival. Vendors from all over Northeast Ohio and beyond will descend on The Walt, including returnees Little Hummingbird Designs, Upward Dog Collars, Noble Fawn Jewelry, and Dude About Town.

Be sure to visit with University Heights resident-vendors, including Tommy Chesnes from PaperThin Co, Annie Rawlinson of Annie’s Kitchen, and Dontty Lakina from Cross Culture.

Carlos Jones and the PLUS Band will perform classic songs, as well as numbers from their most recent album, A New Day. “Let’s get this out of the way,” said music critic Charlie Weiner, “their new album is a masterpiece.”

Diana Chittester will be making her second appearance in University Heights, having performed at a Summer Concert Series show in 2021. “I am so excited to return to The Walt for a solo performance in the park,” Chittester said. “And, hopefully, a hug from Cooper.”

Last seen in University Heights performing with her band Rubix Groove, Shannon Hogarth is a veteran of Fall Fest. She set up shop in both 2019 and 2021 with her jewelry and flower business, Crescent Rose Craft.

“University Heights Fall Fest has been an event I always look forward to vending,” Hogarth said. “It has allowed me to connect with so many wonderful people in [the] city, including the mayor. He bought a cactus from my booth for his office a couple years ago. I hear he had trouble keeping it alive, so I’ll be happy to sell him a new one on Oct. 2.”

Mike Cook is the communications and civic engagement director for University Heights.