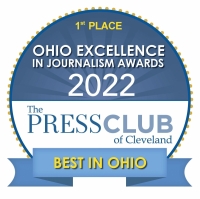 The Heights Observer was recognized as “Ohio’s Best Community Newspaper” at the 44th Annual All-Ohio Excellence in Journalism Awards, a program of the Press Club of Cleveland. The honor was announced in early June at an awards dinner at the House of Blues.

David Budin was recognized this year for his “Songs and Stories” column, with an honorable mention in the highly competitive category for Ohio’s best columnist. He won first place in that category in 2019.

The statewide awards program recognizes quality journalism in all types of media—newspapers, magazines, websites, television and radio. Approximately 700 entries were submitted in the various categories, with judging done by working journalists affiliated with other press clubs outside Ohio. Complete results can be found at pressclubcleveland.com.

The “Best in Ohio” award is based on review of three complete issues of the publication from 2021. We submitted the February, September and October editions for their content around last year’s local elections.

For the small, part-time team that works on the Observer every month, the honor makes for a nice moment. But it’s a bigger reflection on the community itself.

When I talk about the Observer, I often begin by saying it’s not an ordinary newspaper. That’s because it’s volunteer based, and everything we publish comes from community members across Cleveland Heights and University Heights.

At traditional publications, the “news package” (to use the jargon of editors) is planned, with stories assigned to reporters based on what’s happening, what’s interesting and what sells.

For us, the articles arrive with no advance notice, and we build the best "package" we can from whatever people submit.

It’s an imperfect model. Sometimes, big stories don’t get covered at all, or they only emerge over time from an accumulation of opinion pieces. We often struggle to make sense of articles submitted by laypeople on complex topics. (School finance comes to mind.)

But our model is designed for affordability in an economic environment where even major metro dailies can’t make ends meet. And it’s designed to encourage citizen engagement in the community and government—something that rarely figures into the mission of traditional publishing ventures.

The result is a publication that, on one hand, is frustratingly less than comprehensive, and, on the other, more reflective of its community than most.

Not every community could sustain a project like the Heights Observer. We’re blessed with all the right attributes: a strong collection of independent business and nonprofit advertisers that support it financially; an activist citizenry that fills its pages; diversity that provides a wide range of perspectives; and an “us against the world” mentality that breathes life into it month after month. That’s the real reason I think we keep getting recognized for this award. It’s a pretty good publication that’s part of an amazing community.

Other selected winners are: