UH will celebrate Juneteenth at The Walt 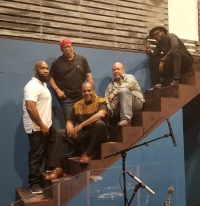 Juneteenth is the holiday commemorating the end of slavery by marking the day enslaved people in Texas learned they were free.

Last year, after Juneteenth became a national holiday, Mayor Michael Dylan Brennan called for the establishment of a Citizens Committee to plan for an annual celebration. Geoff Englebrecht swerved out of his lane as the city’s director of Housing and Community Development to help organize the city’s celebration.

“For both visitors and residents, I am hoping they are both educated and entertained during the event,” Englebrecht said. “I believe the Juneteenth celebration will help showcase the city as a great place to visit, and will give residents something they will be able to enjoy and look forward to every year.”

Performers at UH’s Juneteenth celebration will include the All City Choir; DJ Marcus Alan Ward; local poets, including Raja Belle Freeman; dancers; and a concert by Forecast. Local Black fraternities and sororities will participate. The emcee for the event will be Kierra Cotton from WKYC-TV.

Food trucks will be on site at The Walt, including The Dawg Bowl Cajun Cuisine.

Forecast will headline the event. A quintet from Cleveland, Forecast plays a musical blend of jazz, funk, rock, reggae and pop. The group has served as the house band for the Cleveland Cavaliers, and the stage band for the regional Emmy Awards.

Cotton, the event’s emcee, shares with WKYC-TV’s audience the top-trending stories in entertainment during her daily segment, "Pop Break." She covers additional stories, with a focus on local businesses, the Black community, and unique characters across Northeast Ohio.

This year, Juneteenth falls on Father’s Day—an overlap that Englebrecht considers perfect. “Instead of just grilling out at home, bring your dad to Juneteenth,” Englebrecht said. “It’s a family-friendly event that everyone will enjoy.”