The Grant Deming House was unusual for its time 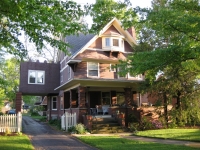 The Grant Deming House as it appeared in 2009. [photo by Mark Souther]

Grant Wilson Deming, a native of Sarnia, Ontario, moved to Cleveland with his brothers in the 1890s. They quickly became fixtures in local real-estate development.

The Demings built upper-middle-class residential districts in Cleveland's Glenville area to the north of University Circle in the 1900s. Grant's brother Barton set out on his own to redevelop Rockefeller's old Euclid Golf Club in the "Heights" to the east, as a fashionable destination for Millionaires Row families seeking a more sylvan setting away from the city.

Grant Deming built his own home in 1909 at 3154 Redwood Road, just behind the present-day Zagara’s Marketplace.  Designated a Cleveland Heights landmark in 2003, it is an unusual design for Cleveland Heights because it reflects a late-Victorian idiom more commonly found in older urban neighborhoods with homes constructed around the turn of the 20th century.

Although the plan for Forest Hill would include its own grand boulevard, Washington Boulevard, as a fork off of Euclid Heights Boulevard, the earliest marked entrances to the allotment were on its north side, at the fork of Lincoln Boulevard and Woodward Avenue, and on its east side, where Redwood Road once met Lee Road (before it became part of Zagara’s Marketplace’s rear drive).

Obelisk-shaped stone piers with pyramidal bases and decorative iron street signs flanked the Redwood entrance, which led directly to the site where Grant Deming built his family homestead in 1909. His choice of a homesite, at the farthest point from Cleveland’s eastward growth rather than on the Euclid Heights allotment side to the west, may have reflected a desire to live closer to the open countryside, if only for a short time.

Deming’s homestead originally consisted of three lots, each 50 feet by 202 feet, with the house occupying the center lot. The cross-gabled wood shingle home almost precisely replicated one built for the Deming Company’s secretary, Albert C. Newton, still standing at 10607 Drexel Ave. in the Grantwood allotment off East 105th Street in Cleveland’s Glenville neighborhood. Both houses reflect elements of the Queen Anne and Shingle styles, with cedar-shingle siding, half timbering in the side gables, irregular massing, simple detailing, bay windows, and large porches.

A matching carriage house with a front-gabled gambrel roof stands to the rear of the Deming house. In 1914 Deming added a castellated porte-cochere with a second-story bedroom on the house’s east side. Deming employed two maids, a chauffeur, and full-time gardeners to tend his estate. Later, after World War II, the lot to the right of his house was sold for a new Cape Cod bungalow—as unusual in its 1910s to 1920s setting as Deming’s house.

Since 1999, Mike Madorsky, Elizabeth Stern, and their children have called Deming’s house their home. Madorsky recalls meeting Grant Deming’s grandson late in his life. Deming shared old photos and stories that add to the historic appeal of this Cleveland Heights landmark.

This article is adapted from Mark Souther's National Register of Historic Places nomination for the Grant Deming House. Souther is a member of the Cleveland Heights Landmark Commission, which preserves and protects buildings, works of art and other objects of historical or architectural value to the community. The commission's seven members are appointed to three-year terms by CH City Council.