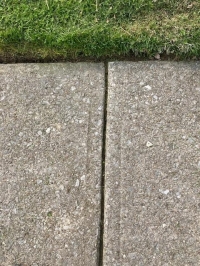 A Monticello Boulevard sidewalk after edging and weeding.

Residents of Monticello Boulevard have been working together to enhance the “curb appeal” of the 70 properties along the busy corridor from Lee Boulevard to N. Taylor Road. Extending through the east-west borders of Forest Hill, the corridor is a prominent showcase for Cleveland Heights.

The project is simple: edging along both sides of the sidewalk, removing weeds from sidewalk cracks and along the curb, and removing debris from street gutters.

The project's success reflects residents’ interest in improving the appearance of this busy street. It also serves as an example to build awareness of this simple process, to enhance curb appeal on other streets, in Forest Hill or elsewhere.

The project was the idea of Nate Wright, a Forest Hill Home Owners trustee, who has lived on Monticello Boulevard for 36 years. The project’s co-leader, Clyde Henry, said that the beautiful impression the boulevard made on him 42 years ago was what made him decide to move to the neighborhood.

The project's first step was the distribution of flyers showing the difference edging can make, through before and after photographs. Edging and curb cleansing enhances the appearance of lawns as well as the entire street.

Wright and Henry have achieved great success with their “simple” process. Drivers on Monticello should notice a marked improvement in the street’s appearance, and residents can be happy with the work they did. Working together, residents also made new friends and met neighbors they did not previously know.

Jan Milic is a 46-year resident of Forest Hill. She is currently a trustee of Forest Hill Home Owners Inc., and has served as its president.