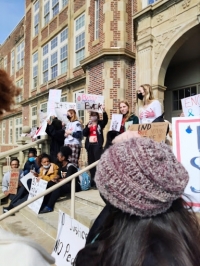 Since December 2021, hundreds of CH-UH students have organized to protest the school district administration’s response to reports of incidents of sexual violence.

The impetus for student action coalesced in December, when a female Heights High student posted on social media her account of being sexually assaulted at the high school, and what happened when she reported the assault to the school’s administration. She wrote that she was told it was a “he said/she said” situation; she was not offered supportive resources, nor was she informed of her Title IX rights. (The Title IX law ensures a public school environment free of sexual harassment.)

Among those who read about her experience was a 2020 Heights High graduate, who said that she, too, had been sexually assaulted at the school, and received a similar response from the school administration when she reported it.

In the aftermath, other students came forward, and additional reports emerged of sexual violence at Heights High and other school buildings in the district.

The group planned a December walkout, to protest the district’s handling of the alleged assaults, as well as what students describe as Heights High’s “rape culture,” in which students experience hallway harassment, and the alleged offenders continue to attend the school, rather than being moved to online learning. (In one case, for example, in summer 2019, a perpetrator was found guilty in county court; the convicted juvenile sex offender was allowed to continue his education in the same building as the person he was convicted of assaulting.) Another walkout was held on March 10, with protestors noting that perpetrators have full privileges attending in-person school, while survivors become isolated due to trauma and fear.

Enough is Enough! also developed a list of demands for district action. The list was read aloud at the March 10 protest; distributed outside Heights High on March 16 at the time of the superintendent’s State of the Schools address; and can be viewed online at http://www.bit.ly/enoughCHUH. The demands are:

Districtwide sex education: An immediate districtwide commitment to comprehensive, developmentally appropriate, and ongoing sex education and consent curricula for all students pre-K to 12th grade, taught by a specialist such as the Cleveland Rape Crisis Center.

Transparency and action: Clear partnership and transparency among students, staff, administration, and community partners to ensure that all victims of sexual assault/harassment have the ability to report incidents and receive trauma-responsive support, including unbiased and accurate information about policies, procedures, supportive community services, and their rights.

A modern dress code: A revised, gender-neutral, anti-racist dress code that is consistent across buildings.

Accountability and consequences: Accountability for trusted adults (coaches, administrators, Miramar staff) who failed to be trustworthy; who minimize sexual violence and protect perpetrators; who undermine safety plans for victims; who fail to protect victims when they violate mandated reporting and Title IX laws.

[Editor's notes: This article has been corrected. The date of the second student walkout was March 10.]

Kate Kikel has lived in Cleveland Heights for over 15 years and has loved raising three children here. She is a concerned community member who has a focus on helping children to grow up understanding concepts of justice and consent. She is not a member of Enough is Enough!